Concentration of power is the problem

Occasionally I find myself in a conversation where I’m asked to sum up my basic message: In my writing and speaking, what is it that I’m really trying to say? After all, for 25 years I’ve been going on about the internet, and in the past 5 years I’ve leaned heavily into criticism: identifying Big Tech companies as criminal actors, explaining the dangerous nonsense of NFTs, reflecting on the rise of surveillance after 9/11, predicting Apple’s (and others’) upcoming “smart” glasses, and much, much more. It’s a broad area of inquiry, almost too broad for me to realistically sum up in a phrase.

And yet I do have an answer. While it’s necessarily incomplete, one way to summarize my message is that the problems we’re facing from technology are caused by the concentration of power. As I like to put it, all of the world’s money and power, outside China, is swiftly being handed over to eight dudes in Silicon Valley.

I exaggerate for effect, of course, as it’s not literally limited to the peninsula below San Francisco. There’s also Seattle, D.C., and New York’s Wall Street banks. But imagining the scene – a hefty chunk of all worldly power, bestowed upon a handful of people on a tiny strip of land – gives a fairly accurate picture of the imbalance we face, and why so many things feel out of whack right now.

Shira Ovide tried to get at it in today’s On Tech column:

Here’s a fact to consider. Just the five AMGAF companies, along with Tesla, now account for nearly 25% of the market capitalization of the S&P 500 (source). All of them are based in Silicon Valley or Seattle (with hefty lobbying operations in D.C. and financial partners in New York). And between the six of them, they directly affect the lives of a majority of human beings living outside China.

(I keep saying “outside China” because of this. Though American Big Tech is complicit there, too.)

Shall we count up the dudes, all dudes, running the companies? Cook, Nadella, Pichai and his shadow bosses Page and Brin, Bezos, Zuckerberg, and Musk. (Yes, I know Bezos is executive chairman, not CEO. Still.)

My point is not to give an exhaustive list of companies and leaders, because as well as being boring, it would distract from the actual root of our problems: the power structure. Specifically, the unjust and inhuman concentration of power in a few hands, to a degree that arguably has no historical precedent.

If I had to trace the contours of the problem, it would look something like this:

• Power has always had a tendency to concentrate. Stated another way, powerful people have always tended to focus on gaining more power. This is nothing new.

• What is new is that digital technology allows power to be exerted on a global scale, consistently, with minimal human involvement.

• Thus power in the digital age will tend to be concentrated in the hands of a minimal number of people, who will use the available tools to protect their power and gain even more.

• This process of concentration also means that, by definition, power will be drained out of a vast and growing expanse of society. People affected – the majority of people in society – will eventually rise up to resist the process, unless some counteracting force is applied.

• The tiny group of people holding onto power will use digital tools to their fullest extent, enacting surveillance and control mechanisms – both to be warned of any nascent resistance, and to apply distraction, manipulation, or outright control to negate any challenge to their power.

It’s no coincidence that the Big Tech companies, as different as they are, have recently converged on the same, single business model of surveillance and control. Consider:

• Amazon started as a commerce company, but increasingly it sells Alexa, Ring, and other surveillance devices – as well as the cloud services to store and analyze the data.

• Apple started as a user-focused computer company, but increasingly it focuses on surveillance devices (from the WSJ this week: Apple AirTags Can Be Used to Track You) with more coming in the future (see my own predictions for Apple’s smart glasses).

• Facebook’s model of surveillance and manipulation has been well-known for years, but recently the company announced its plans to launch the “metaverse,” an environment of total control (see my column Smiling in the metaverse). Yesterday’s news of Facebook’s stock-price drop offers a glimmer of hope, though that’s more due to Apple and TikTok moving in on Facebook’s mobile-surveillance business. (See this NYMag piece, by Kevin T. Dugan, a past Techtonic guest.)

• Microsoft, the original evil Big Tech company, has not reformed at all but instead has merely gotten better at PR. It continues to invest in surveillance-related technology – including plans, like Facebook, for a fully-controlled metaverse (source) and, like Amazon and Google, a growing business in cloud services.

As for Tesla, its surveillance-systems-on-wheels have a long way to go before they live up to Elon Musk’s hype. As Arthur Holland Michel (past Techtonic guest) put it, “If your ‘autonomous’ vehicle needs someone with the reflexes of a fighter pilot to keep it from crashing, maybe it ain’t all that autonomous.” (See the one-minute video.)

The concentration of power in Silicon Valley is the root cause of the problems we face from Big Tech. And with all five companies falling into lockstep around the same surveillance-and-control model, we face a monoculture: one that is growing, strengthening, and solidifying its hold on all of us.

As for what we can do about it, I have some thoughts. For next time. 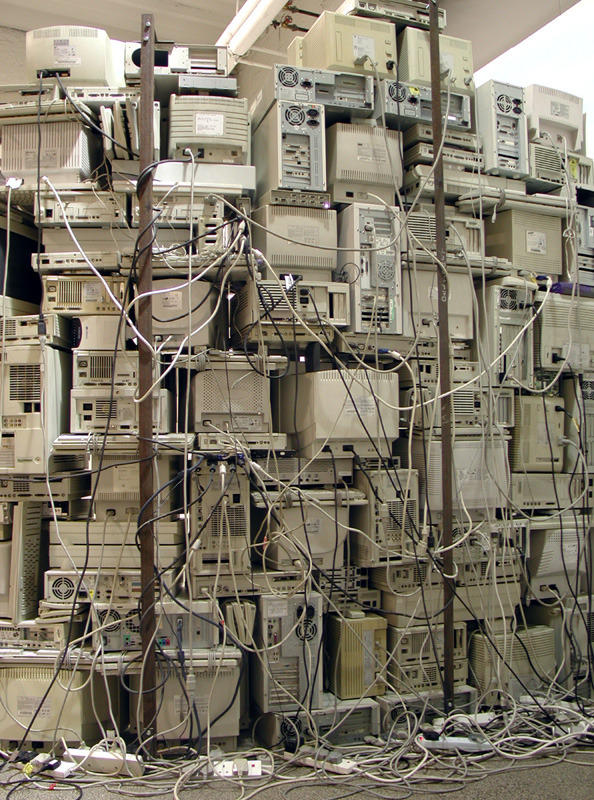 Above: undercover photo from inside a Big Tech cloud facility.