Reflections on a quarter-century of trying to improve the web.
By Mark Hurst • January 7, 2022

On January 7, 1997, I walked into the county clerk’s office in White Plains, New York and filed the paperwork to start a new company called Creative Good. The web was just a few years old, and I intended to make it better.

A quarter century later, to the day, I feel compelled to say something to mark the occasion – starting with gratitude. Creative Good is still here, I suppose making it one of the longest-running internet companies in the world, and I’m grateful for that. If nothing else, I’ve racked up some longevity: the Creative Good blog, which I started in January 1997, and the email newsletter, started in 1998, are among the oldest online publications still in operation. While it’s arguable – at best – whether the web has improved since 1997, I’ve still found it worthwhile to write about it, trying to encourage better experiences and long-term outcomes online.

I’m also thankful that Creative Good has allowed me to launch a generous number of experiments. Some didn’t pan out, like the time I almost invented Yelp (a story for another time), but many of the projects turned into something interesting. The Gel conference, which I launched in 2003, ran for 15 years and has since evolved into a radio show (and podcast) called Techtonic, which I run as a volunteer with WFMU. My productivity platform, Good Todo, was the first online to-do list in the world when I launched it in 2005. It’s still here, almost 17 years later, and like many die-hard fans of the tool, I use it every day.

More recent launches: Good Reports, my review site for Big Tech alternatives, is still mostly unknown but I’m happy to keep expanding it. And most recently, I launched the Creative Good member program, which has sparked ongoing conversations – free from algorithms and Big Tech meddling – on the new members-only Creative Good Forum. (If you want to help me celebrate this 25th birthday, join Creative Good today.)

Throughout it all, I’ve tried to stick to the vision: online tech can be good, but we have to be more inclusive, and more integrated, in the creative process. This was the message of my book Customers Included, and it’s the process I bring to my consulting projects – which I still run, for teams interested in building better products. (Contact me if you’re interested to learn more.)

But I’ve learned about a lot more than just product development. Spending 25 years online – practically the entire history of the web – has offered the perfect vantage point to observe enormous changes, and more than one “techtonic” shift, as digital tech has infiltrated every aspect of life. Exponential increases in some things (bandwidth, processing power) and a flatlining of others (which I’ll get to) were common along the way. The booms and busts, the unlikely successes and the giant flameouts, the noble attempts and the con jobs. The cliche is “I’ve seen it all,” but really, in the volatile bubbling stew of – whatever this has been online – I’ve seen quite a bit.

Here are a few of my takeaways from 25 years at Creative Good:

• The late 90s were an unusual moment to start a career in tech, as the birth of the web gave a fleeting glimpse of a better path. The evil incumbent, Microsoft, was briefly hobbled by an antitrust suit (and its own intrinsic arrogance), allowing the starry-eyed Google founders to briefly act in accordance with their slogan, “Don’t be evil,” before reversing course a few years later.

• When the 2008 financial crash inspired Wall Street bankers to move to San Francisco, the game was over. Business models in Silicon Valley – while certainly far from pure before then – became noticeably more exploitative starting in 2009, ushering in our current era, what Shoshana Zuboff calls “the age of surveillance capitalism.”

• Matching that same rise and fall, user experience has dramatically changed since I helped start the discipline in the 1990s. As I wrote last year, UX today is better described as “user exploitation.”

• The importance of money: ah. Something that my idealistic 1997 self tried to avoid, or ignore. The lesson, boringly obvious to me now, is that it’s hard to understand much in tech today without understanding how money works. (Read The Enchantments of Mammon by Eugene McCarraher for a good survey over the past 200 years of American business.) The financialization of everything has been accelerating over the past 20 years (read Rana Foroohar about this), and it’s only going to continue. So the study of money and power are essential, and getting more important.

• Silicon Valley’s unethical, exploitative, immoral, even criminal behavior (as I wrote about recently) is nothing new or unusual in the history of the tech industry. Tech critics have been writing about these same problems for decades. Lewis Mumford’s Technics and Civilization (1934) and Jacques Ellul’s The Technological Society (1954) predicted many of the problems we face from Big Tech. Earlier than that, E.M. Forster’s The Machine Stops (1909) and Yevgeny Zamyatin’s We (1921) warned about the dangers of an isolated, screen-dependent society. My point is that thinkers have been writing about the exact problems in our current moment for the last century... and yet here we are, having built the systems they warned us against. I take it as a reminder to be realistic, and humble, about the limited effects my own efforts can have on the world.

• In the end, what I’ve learned about online tech over 25 years is that it’s not about tech at all. In fact, focusing too closely on the tech – the shiny newness with the cool features – is a dangerous distraction from what this whole venture is really about: the people, communities, and ecosystems affected by tech. Our moral compass, our integrity, and our record of past behavior are all that counts. Not the money and power we’ve amassed, not the awesome spaceship ride we took. The only thing that matters – to me, anyway – is whether we’ve created something good.

And a quick birthday invite. Creative Good members and I are getting together in a little over an hour – at 3pm Eastern today, Friday, Jan 7 – on a Zoom call. Join Creative Good right now to get an invite to the 3pm Zoom. (You’ll also get access to all the members-only columns linked with lock-icons on the blog.) 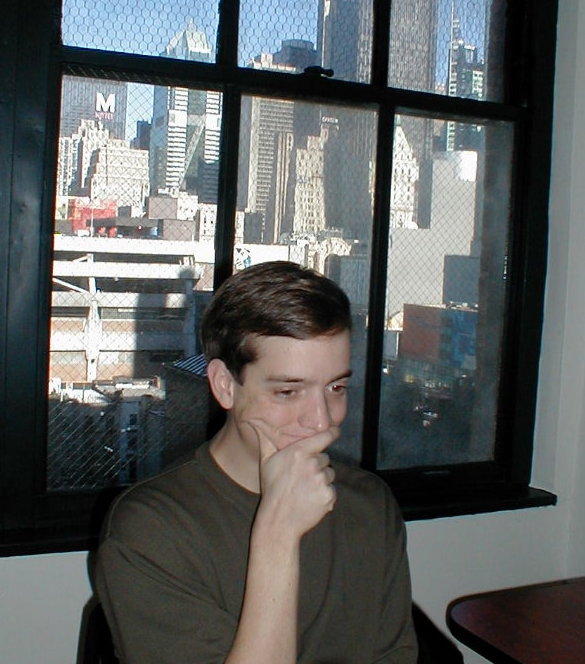 Above: a fresh young face, three years after founding Creative Good. The innocence of youth!