(Happy last column of the year! The newsletter will resume on Friday, January 7, which is the 25th birthday of Creative Good. I hope you’ll join the celebration I’m hosting on Zoom that day for Creative Good members. To get an invite, join Creative Good.)

In this holiday season of shopping and gift-giving, would you consider buying someone a tiger cub, or a cheetah? How about an endangered parrot? Or perhaps some ivory, from a freshly slaughtered elephant? All of these – and much, much more – are easily available thanks to the chief broker of illegal goods today: Facebook. The animal trade online is so widespread, in fact, that “Facebook is directly fueling the global extinction crisis for parrots, cheetahs, elephants and many other endangered species” (source).

It’s not just Facebook. On Google’s YouTube you can watch unspeakable things happening to animals, or view step-by-step instructional videos about how to set up and run scams online. And on Snapchat the algorithm will serve up offers for opioids and other fake prescription pills, which are often laced with lethal doses of fentanyl. Teenagers are especially susceptible to these pitches, and some have died as a result of trying drugs suggested by Snapchat. This is difficult reading: Eight parents mourn children poisoned by deadly pills bought on Snapchat (by Olivia Solon, NBC News, Oct 1, 2021). Jaime Puerta, the father of one of the victims, spoke on a Harmed by Section 230 panel (hosted by Carrie Goldberg and ACCO, both mentioned below).

Facebook is awash with drugs, too: Tech Transparency Project reports that “it only takes two clicks for a teen to connect to a drug dealer on Instagram,” while Facebook’s “ad platform allows ads promoting pharmaceutical abuse targeted at teens as young as 13.”

In all of these transactions, whether selling animals or drugs, massive profits flow into the Big Tech platforms. The higher the “engagement” – often encouraged by the platform’s own algorithm – the more money the platform makes.

This is grim news to end the year on, I know, but it’s important to remember what’s at stake when we talk about digital tech: namely, the richest, most powerful companies in human history are flagrantly enabling crime for profit, on a global scale, with zero consequences. As I wrote in The fall of Facebook (Sep 23, 2021), far from being penalized for its criminal complicity, Facebook’s share price keeps going up. And not a single Facebook or Google executive has yet been sent to prison. That’s wrong.

Look for the helpers

The good news is that there are people working to combat Big Tech’s criminality. One of the more important conversations I’ve had this year on Techtonic was on this week’s show with Gretchen Peters, executive director of the Alliance to Counter Crime Online, or ACCO:

One key point Gretchen makes is that Facebook and Google defend themselves with Section 230, the infamous clause in the Communications Decency Act of 1996 that allows internet platforms to host whatever content they want, without fear of prosecution. The idea is that internet hosts are “common carriers” not liable for what their users post, much like AT&T isn’t liable for hosting a phone call where people discuss doing something illegal.

The problem, of course, is that Facebook and Google aren’t neutral platforms merely hosting content, they’re the exact opposite. The algorithms driving the feeds at Facebook, Instagram, Snapchat, and YouTube all elevate some content and demote others: by definition, these services are publishers. It’s no wonder that old publishers (newspapers, magazines, etc.) have all declined while the new publishers (Facebook, Google, etc.) have risen. They’re all publishers, but the new ones have escaped the responsibility, liability, and costs that come with the publishing business.

The outcome of Section 230 is that the biggest publishers in history, Facebook and Google, are allowed to promote any content, no matter how flagrantly illegal, without any consequences – except, of course, massive profits and growth. True to their singular value of “growth at any cost,” Big Tech companies use every possible measure to turn exploitation into dollars. As lawyer Carrie Goldberg put it in her congressional testimony earlier this month: “Section 230 makes it virtually impossible for plaintiffs wounded by tech companies to get beyond the front doors of the court before their case gets tossed to the curb like garbage.”

As Gretchen pointed out during our interview: if the New York Times started running ads for illegal drugs, the paper would immediately be hit with legal penalties. Yet Facebook is operating the largest market for illegal goods in history, connecting buyers and amplifying illegal content for profit, and regulators barely give a peep. Animals are going extinct, humans are being trafficked, teens are dying from illegal drugs. And the Big Tech share prices keep going up.

My own conclusion is that Facebook and Google, by their intent and their behavior, are equivalent to criminal enterprises. After all, they build and maintain services that encourage criminality, enable criminality, and profit from criminality. In practical terms, how is this any different from an organized crime network? “If it walks like a duck and quacks like a duck...” 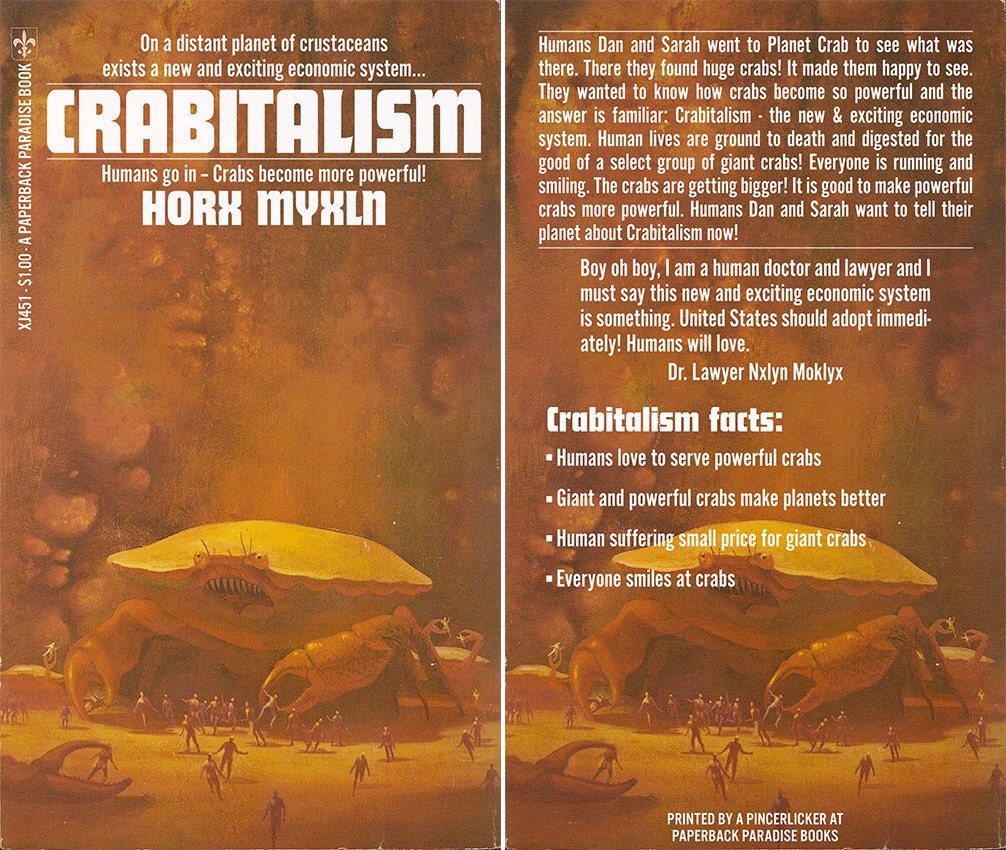 Above: I was amused by this fake book jacket for Crabitalism. Just imagine, a world dominated by predatory beasts that thrive from exploiting humanity – and then have the audacity to present the system as a benefit! Wow, I’m glad that’s totally fictional.

Until next year, wishing you a happy and healthy season.