By now you’ve probably heard about the Facebook Files, the blockbuster series of articles (and podcasts) in the Wall Street Journal earlier this month. It ran as front-page news for five days straight, and for good reason. The revelations were troubling:

• Facebook profits from aiding and abetting organized crime, including drug cartels and human traffickers. And Facebook leadership knows it.

• Facebook’s secret “XCheck” program privileges celebrities and the well-connected, allowing them plenty of leeway in posting misinformation and encouraging violence.

• Facebook’s algorithm is optimized for growth at any cost, not truth or civility. Zuckerberg is on record resisting any meaningful improvement to the algorithm.

Most of these harms were already well-known to researchers and journalists covering Facebook. One might ask, then, why these stories merited front-page placement in the Journal. The reason, very simply, is the Journal showed that Facebook leadership knows about the harms they cause, and they do nothing to address the problem.

It’s no mystery how Facebook could be fixed: turn off algorithmic amplification. Instead of showing users stuff they didn’t ask for, but that will get them to click – salacious Instagram posts, false news feed items, racist Groups invites – Facebook should simply act as a common carrier. When users sign up for a feed from a particular source, they get that feed. Follow a user, get their posts. Search for a group name, find it – like how the phone book used to work. No more opaque algorithms, no more manipulation behind the scenes.

Why do Facebook’s leaders resist such obvious improvements? Not because they’re “bad people” – heavens, no! they’re all such nice, well-intentioned folks – but because Facebook is an incredible money machine. You don’t get to the senior leadership ranks at Facebook by prioritizing something other than growth. Showing concern for the well-being of teenage users, or the state of democracy around the world, is fine for PR purposes – just not for the actual operation of the machine.

And the machine is operating smoothly. Facebook’s revenue is enjoying exponential growth, with no plateau in sight. 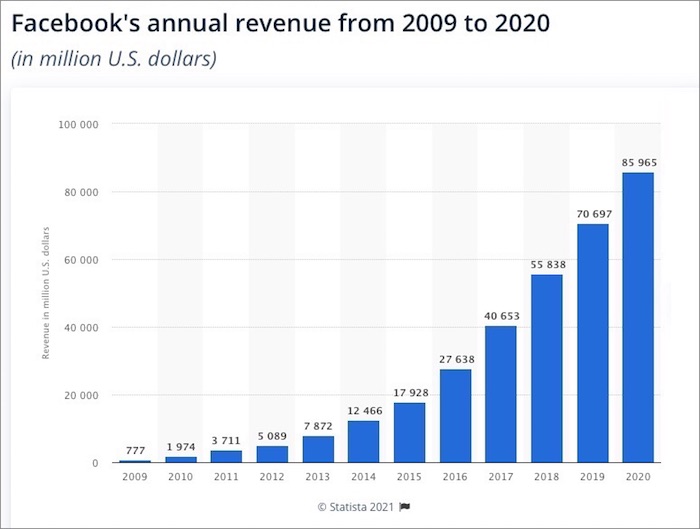 September 2021, then, brings the fall of Facebook: both the inauguration of a new fall season of profits and growth for the monstrous agglomeration, and the revelation of an accelerating, terrifying descent by Facebook’s leaders into what can only be called madness.

Knowingly allowing the intentional harm of millions of teenage girls? Amplifying the spread of deadly falsehoods? Making money – essentially, taking a cut – from the sale of human beings? I wouldn’t want to be a leader at Facebook, in the same way that I would not wish to be Mr. Kurtz in Heart of Darkness – or, for that matter, Colonel Kurtz in Apocalypse Now. Profiting from unholy acts is an ancient recipe for dreadful outcomes. No one is pure, of course, but Facebook is different: the leaders have enabled catastrophe. They’re in free fall.

The only question, at this point, is how Facebook will eventually be stopped. The company’s pursuit of “growth at any cost,” which in biology goes under the name “cancer,” can’t go on forever. There are only two possible outcomes: either the growth is forcibly removed and destroyed, or the growth goes on to kill its host. I hope we can agree that the first outcome is better for all of us.

Roger McNamee, an early investor in Facebook, certainly agrees. Watch this clip of Roger on MSNBC last week, calling for a criminal investigation of Facebook. This is not an idle fantasy. As Roger points out, half a decade of public shaming has done exactly nothing to change Facebook’s trajectory. (See graph above.) We need attempt no more appeals to ethics, or morality, or even basic human decency. It’s over. The only remaining remedy is law, leading to a criminal trial, leading to handcuffs.

Interestingly, Facebook already spent billions to protect Mark Zuckerberg from personal liability, according to a new lawsuit by Facebook shareholders (source: Politico). This shows that Zuck is not only aware of his vulnerability to criminal indictment, he’s already paid off the U.S. government in an attempt to buy immunity... which, ironically, sounds pretty crimey.

Raising the stakes even further is a federal judging looking into Facebook’s complicity in the 2018 genocide in Myanmar, reports the WSJ today. Almost unbelievably, Facebook’s excuse for not sharing key documents is that the company has a deeply held concern for U.S. privacy law. Somewhere out there, a dying Mr. Kurtz moans: “The chutzpah, the chutzpah.”

One more bit of ancient wisdom seems relevant here: Truth has a way of getting out. There’s a strange indestructible quality to it. And so despite the hollow protestations of Facebook’s PR team (see the NYT’s Kara Swisher on what Nick Clegg got wrong), and a laughable post from Zuck himself (threatening, and I’m not kidding, a defamation lawsuit over a NYT detail about surfboard propulsion), the truth will out.

People outside senior leadership are starting to speak up. Lindsay Blackwell, a former Facebook employee now at Twitter, posted yesterday that she left Facebook because of “a culture which has resulted in a suite of products increasingly overrun by hate speech, misinformation, and coordinated violence.” (She adds that “this same culture is now being deliberately bred at twitter, starting with design and research.”)

Meantime, the fall of Facebook continues. But we’ll get through it, and we’ll live through the winter that follows. 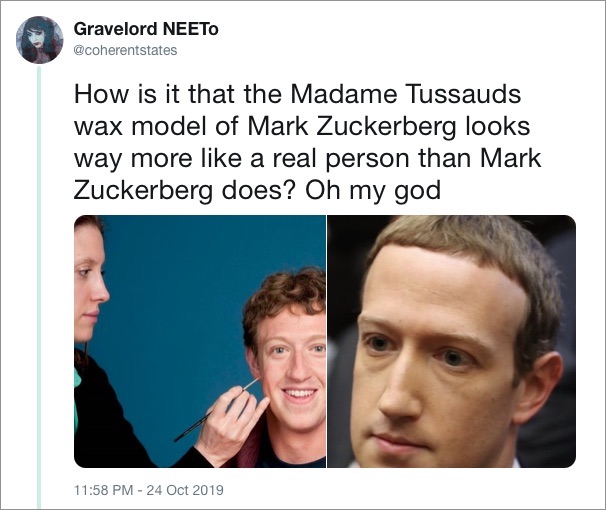 🔒 So, “Zuck talk” is, like, increasing, right? (September 22, 2021): A set of verbal tics is emerging from Silicon Valley billionaires – and spreading to everyone else.

🔒 Robots in baseball (September 22, 2021): The New Yorker, the Strokes, and Techtonic all point out new intrusions of tech into sports.

Please do join Creative Good so I can keep this going.