Smiling in the metaverse

People this week have been floating ideas for Facebook’s new name. Mark Zuckerberg announced that he plans to rebrand the company, much like Google changed to Alphabet, or like – in the case of a less harmful company – Philip Morris changed to Altria.

The announcement coincides perfectly with Facebook’s urgent need to redirect media attention away from the revelations of whistleblower Frances Haugen. Even the timing of Facebook’s outage two weeks ago felt suspicious, falling between Haugen’s appearances on 60 Minutes and in the Senate. The renaming is, at best, a side show. I posted my own suggestion for a new name for Facebook:

How about: “Let’s Not Get Distracted By Zuck’s Renaming Stunt And Instead Get Back To Investigating His Criminal Activity... Inc.”

Timing aside, the more interesting aspect of Zuck’s renaming proposal is his intent to reflect a new direction for the company. Zuck seems to announce a new direction every couple of years: Facebook as “giving people a voice,” Facebook as “building community,” Facebook as “protecting privacy.” All these grand visions proved to be failures, if not premeditated deceptions. (And that last one deserved some sort of award for sheer shamelessness.)

Zuck apparently has decided that it’s time for another serving of nonsense, big enough to call for an entirely new corporate name. Zuck’s new promise is that Facebook will create the “metaverse,” a kind of online world layered onto the physical world through the use of VR headsets and the AR (augmented reality) surveillance glasses that Facebook recently launched with Ray-Ban.

The term “metaverse” was originally suggested by Neal Stephenson in his 1992 scifi novel Snow Crash, set in a dystopian future marked by climate change, social division, gross economic inequality, and predatory corporate monopolies. (Glad we never ended up in that world! Whew!) Zuck’s metaverse, just as the one in Snow Crash, is conceived as a corporate-controlled surveillance world intended to distract people from the very injustices caused by the corporate owner in the first place.

Ian Bogost put it well in an Atlantic piece yesterday. (He always seems to put it well, dang him.) From The Metaverse Is Bad:

The executives know that no company, however big, can capture all the world. But there is an alternative: If only the public could be persuaded to abandon atoms for bits, the material for the symbolic, then people would have to lease virtualized renditions of all the things that haven’t yet been pulled online. Slowly, eventually, the uncontrollable material world falls away, leaving in its stead only the pristine – but monetizable – virtual one.

Bogost correctly emphasizes the key idea. The binding force in the metaverse is the control the companies have over the users and their experience. As I’ve said on Techtonic for years now: Surveillance is never an end in itself. It’s always ultimately in service of control. Companies employ their control to manipulate the experience of individual users, thus guaranteeing compliance with the economic arrangement (such as charging rent for every aspect of your online experience, as Bogost points out).

Paris Marx put it this way, accompanied by a Matrix-themed meme: 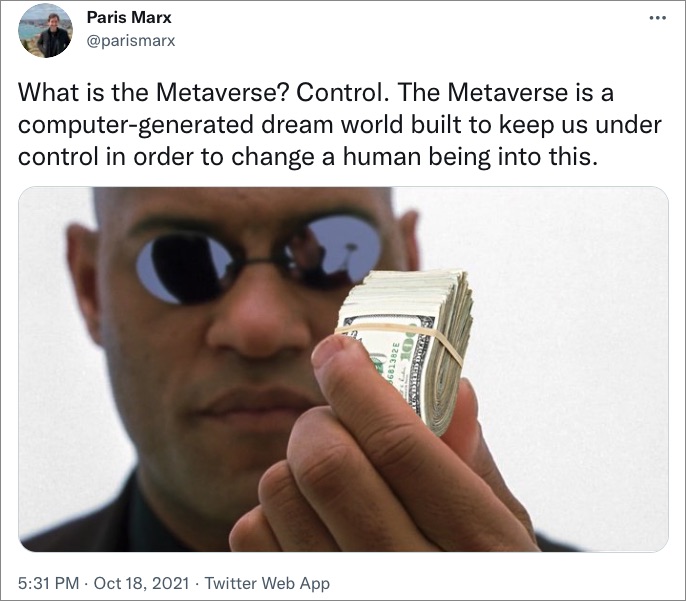 I'll give one brief example of how this control and manipulation can work in the metaverse. I came across 10 seconds of video, shared here, by a user who writes: “Augmented-reality glasses put a smile on everyone’s face.” The video shows people riding up an escalator. As each person passes the camera, their mouth snaps into the rictus of a demented smile. It makes them look a little like the Joker in the Batman movies: 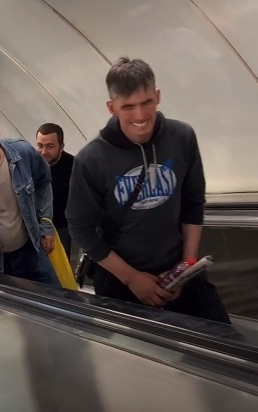 Apparently the video was created with a TikTok video filter and posted over a year ago. Although video filters have been around for years, the froth about a metaverse launched by Facebook – joined, possibly, by companies in China – makes this video clip much more relevant. In their bid for control, these companies may very well decide to put a smile on everyone’s face – forcibly.

It brings to mind Dietrich Bonhoeffer’s Theory of Stupidity, which I came across in this Sprouts video (well worth watching; transcript is also on that page). As Bonhoeffer writes in a letter from prison:

[U]nder the overwhelming impact of rising power, humans are deprived of their inner independence, and, more or less consciously, give up establishing an autonomous position toward the emerging circumstances.

It’s worth reflecting on where the “rising power” is in today’s world. Silicon Valley monopolies are following Bonhoeffer’s description exactly, building platforms to control people, to “deprive [them] of their inner independence.”

None of this is news, though, for readers of my newsletter. Back in February I published Worse than ‘The Matrix’: Tech companies are building a layer on reality (Feb 11, 2021). As I wrote:

Silicon Valley is building its own version of the Matrix: a corporate-owned reality, powered by intrusive surveillance and manipulated by rapacious algorithms, with ordinary people serving as sources of data and energy to be harvested, and monetized, until their death. The key difference, and the reason why this Matrix is worse, is that it’s not just a movie. This corporate layer on reality is actually being built.

Facebook’s metaverse is the “corporate-owned reality” I was trying to alert you to. I just didn’t guess that Zuck would be so dull as to co-opt the term from Snow Crash, a book that was trying to warn us against building a dystopian hellscape. But nuance was never Zuck’s strong suit.

I also warned specifically about Facebook’s surveillance glasses... a year ago. From my column Smart glasses aren’t, on September 17, 2020:

We have one year before tech gets much, much more intrusive. ... Surveillance eyewear will arrive in 2021, and you’ll be asked to put it on.

Silicon Valley is already beginning to drip its pre-launch teasers to the tech press. For example, The Verge yesterday reported that Facebook’s first ‘smart glasses’ will be Ray-Bans, coming next year.

All of which is to say, we have plenty of warning about where things are headed. We just need to pay attention. (Two spot-on reviews of the Facebook glasses come from S.A. Applin in Technology Review, and Evan Selinger in today’s Boston Globe.)

I’m hoping that Zuck’s metaverse is going to fail – if, indeed, it ever gets launched at all. Past his track record of failing to deliver on grand promises (like “building community”), it’s just not a good moment for Zuck, as he’s under immense pressure from –

• regulators: state (many), federal (several agencies), and foreign (EU and others)
• new lawsuits (he was just named personally in a consumer-protection lawsuit, with possible liability in the hundreds of millions of dollars)
• and possible criminal charges for him or his executives, such as this Senate letter making oblique reference to perjury, a federal crime.

Even if Zuck could build a metaverse, I’m not even sure he intends to. The announcement might just reveal a desperate need to show the media – and Wall Street – anything, absolutely anything, that will get them to stop talking about the whole “harming our users for profit” business model.

Still, regardless of what Zuck does – regardless of whatever ridiculous name he bestows upon his empire of sludge – and come to think of it, that would be a decent one, Empire of Sludge, Inc. – regardless of any of this, there is work afoot to build elements and aspects of a better metaverse. There’s reason for hope.

Smiling in the metaverse

Ironically, even though Zuck will probably fail to build the metaverse, we’ll still get one... sort of. In fact, in a way, it’s already being built. It’s not the corporate-controlled surveillance dystopia of Zuck’s dreams. But there is a layer of online experience being constructed, here and there, using the traditional Internet as its foundation. This “miniverse,” I’d call it, is not global, nor is it owned by monopoly corporations, and it’s not a monolithic platform that everyone can log into. It’s in bits and pieces, not for money, mostly a labor of love. These developments are exactly what I’ve been trying to highlight on my Good Reports site.

Consider the Best music platform entry. There are three options for music: one company (Bandcamp), one nonprofit (WFMU), and one individual-run project (myNoise). All of them provide countless hours of streaming or downloadable music, there’s no surveillance capitalism to speak of, and payments or donations are only gently suggested. So – just surveying music as an experience we can have online: if we’re interested in the “miniverse,” there’s no need to wait for Spotify or Apple Music to make a grand announcement. We have the music “layer” already installed and available.

I can imagine this approach being extended to other aspects of a “miniverse” – news, gaming, commerce, payments, and so on – all built outside the predatory models and opaque algorithms of Silicon Valley. Little by little, thousands of teams worldwide could create an online environment that optimizes for the long-term good of the community, rather than short-term theft by oligarchs. (I’ll continue to spotlight the best projects I find, over at Good Reports.)

But about the name...

Finally, as for the new name for Zuck’s company. Maybe something “meta” – no, that’s been done. How about something “para,” like a parallel reality. Some sort of site for a parallel universe. Eureka! Carrie Goldberg posted it. I hope you’ll agree, this has to be the winning name:

I’m looking forward to seeing the new signs go up. 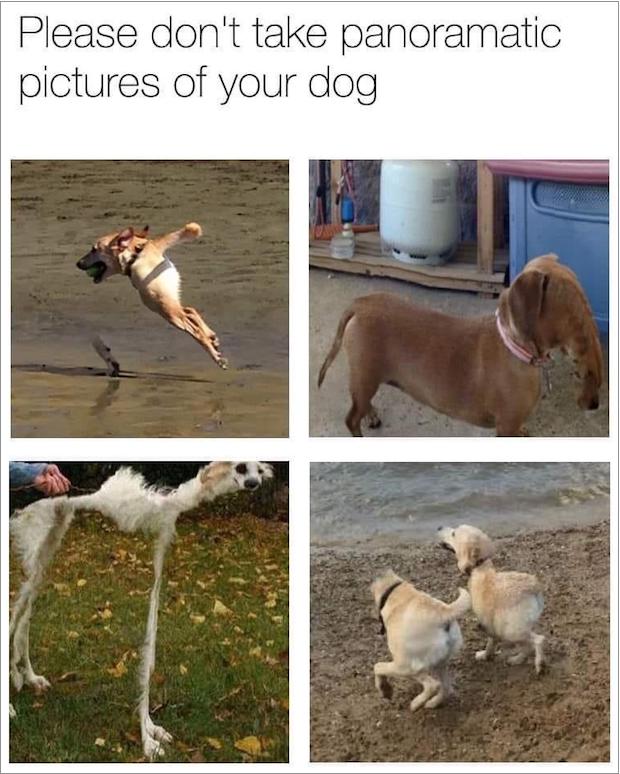 (Be careful when bringing your dog onto the metaverse.)