It’s a moment for reflection, with the 20-year of 9/11 coming up on Saturday. You’ve surely seen posts and articles by survivors, journalists, historians. I appreciated this WSJ profile of Deborah Borzah, the mother of a 9/11 victim, who has worked tirelessly to memorialize the passengers on Flight 93.

Inescapable questions: Who were we then, and who are we today? What changed? Perhaps we can compare life Before with what happened After, in order to make sense of 2021.

Let’s start small. Airports. Just after 9/11 there suddenly appeared new inconveniences and restrictions – no more walking to the gate to meet passengers, leading to a few years later, walking through security in sock feet. “Take off all shoes, belts, and jackets, and place them in the bins provided.”

But something else was changing, something much bigger than airport security checks. We devoted much of our economy to a “war on terror,” handing over vast riches to anyone who would promise order and control. By now it’s all too clear how this worked out. First, a misadventure in Afghanistan: what started as a legitimate operation to hunt down the terrorists metastasized into a trillion-dollar, twenty-year debacle. And then an unconscionable sin in 2003, blundering into Iraq, a country that had nothing whatsoever to do with 9/11, and selling it to the world with faked evidence. Many thousands of Americans were killed or wounded. A corrupt dictator was executed, yes, and hundreds of thousands of innocents also died.

Trillions and trillions of dollars were wasted. Much of it was directed to American contractors who racked up obscene profits designing and installing a security state in the war zone: drones, cameras, sensors, and blast-proof walls. Soon enough they found a new market for their wares, far away from the Middle Eastern conflicts: the U.S.A.

The “war on terror” yielded a massive opportunity, here at home, for any company that could either supply the goods – surveillance-and-control platforms – or stoke demand: dividing, inflaming, and enraging the populace. After all, a divided country produces citizens who consider “the other side” as enemies in need of control. Even better if some of them, with proper encouragement, actually do turn out to be domestic terrorists.

One company in particular has excelled in both encouraging hate and promising to control it. As I wrote a few months ago, the enemy flag paraded through the Capitol building on January 6 was proof that Facebook worked exactly as designed. Far from pulling back, the company has only redoubled its efforts since January, leading Mother Jones to observe last month that a large swath of Americans “still believe the November election was stolen, and also don’t believe COVID-19 is a big enough threat to be vaccinated. And they believe these things this in part because Facebook has amplified them.” Emphasis mine: algorithmic amplification is at the heart of Facebook’s business model, driving profits by stoking the misinformation that divides Americans.

To be fair, Facebook isn’t alone here. Twitter similarly uses algorithmic amplification to throw gasoline on cultural fires. As the Nation put it last week, Twitter believes that “‘the more chaos, the better,’ as it’s chaos that begets information. All of the passion and emotion that we expend on the platform is geared toward one thing: making money by selling data.” And that’s before we get to other algorithmic nightmares, like TikTok automatically serving up sex and drug videos to kids (as the WSJ reported yesterday), and Google/YouTube, as I’ve written before, serving up kids themselves.

Facebook has become too big to escape... [including] the sheer volume of data they collect. At stake in all that personal information is the ability to manipulate our economy, our society and even our democracy.

Again, emphasis mine. Because this is where we’ve ended up, 20 years after 9/11: the “war on terror” funded a surveillance state that Facebook, Google, and others are monetizing, and expanding, thus accruing power that rivals the U.S. government itself.

A Washington Post article this week, surveying books about 9/11, writes that the U.S. has become “a nation divided in its sense of itself, exposed in its moral and political compromises, conflicted over wars it did not want but would not end.” I’d add that, nearly 18 months into Covid, we’re barely ready to take on the problems of healthcare and inequality exposed by the virus, let alone address the metastasizing surveillance state run from Silicon Valley. If 9/11 brings with it a sense of loss, the smartphone era has deepened our alienation, from the world and from each other.

Strangely enough, it’s the very divisiveness of the algorithms that drives people toward the Big Tech platforms. After all, if the government can’t keep us safe from “the other side,” at least Silicon Valley will let us peek through its funhouse mirror to see what the villains are up to now.

As faith in our government – and each other – has declined, something has had to take its place. We’ve filled the gap with the very things we bought with those trillions of dollars: more surveillance cameras, more data centers, more opaque algorithms. Cynics would say that some have capitulated: If democracy is broken, at least we can reliably get our social media feeds. If voting doesn’t give us the leaders we want, at least our apps tell us what we want to hear. I’d guess there’s a grain of truth to that, though larger economic factors are the prime mover.

America today is blanketed by surveillance in ways that would have been unthinkable in 2001. Albert Fox Cahn writes in Wired today that 20 Years After 9/11, Surveillance Has Become a Way of Life: just in New York City, tens of thousands of cameras record citizens moment-to-moment, then share the footage with police and Big Tech for further processing. As for the police, the NYT reported yesterday that the N.Y.P.D. Is Using Post-9/11 Tools on Everyday New Yorkers, deploying battlefield tactics like drone surveillance on constitutionally protected protests.

It’s really everywhere. Just today Facebook launched surveillance sunglasses, in partnership with Ray-Ban, allowing wearers to record everyone around them. (Here’s my thread on the thopic.) Even grocery stores, for Pete’s sake, are being weaponized against us. Shoshana Wodinsky writes in Gizmodo (Sept 8) about the “Amazon panopticon,” explaining that “when Whole Foods customers opt-in to the convenience of just walking out with their groceries, they’re also opting into the massive surveillance infrastructure” that powers the new checkout feature.

When your grocery store’s new offering is “massive surveillance infrastructure,” you know something is wrong.

Speaking of Amazon, did you see the photos of its new Tijuana warehouse? 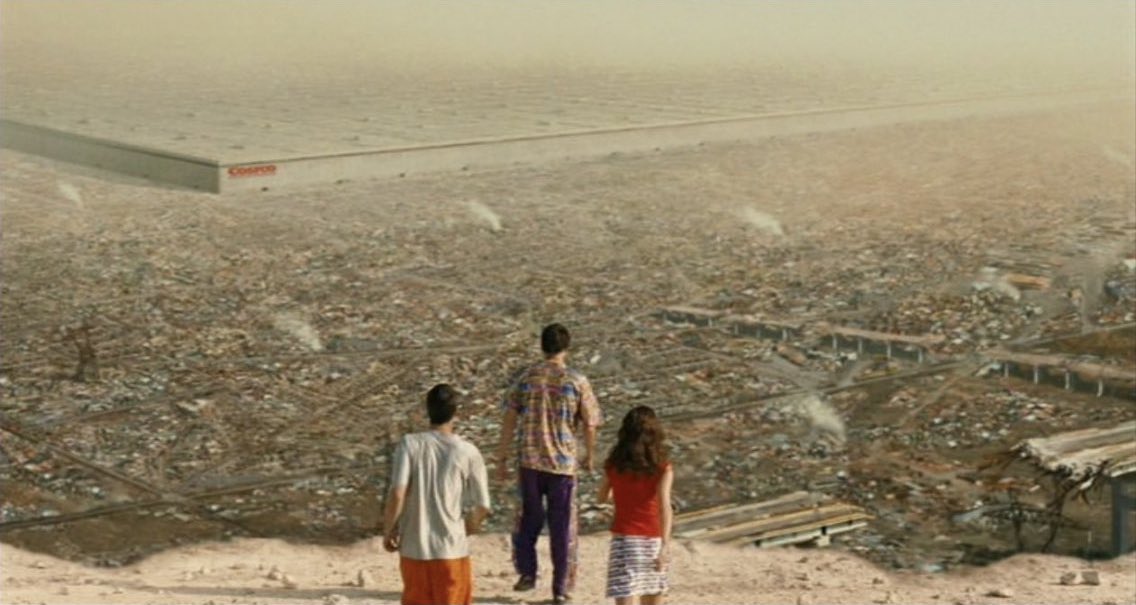 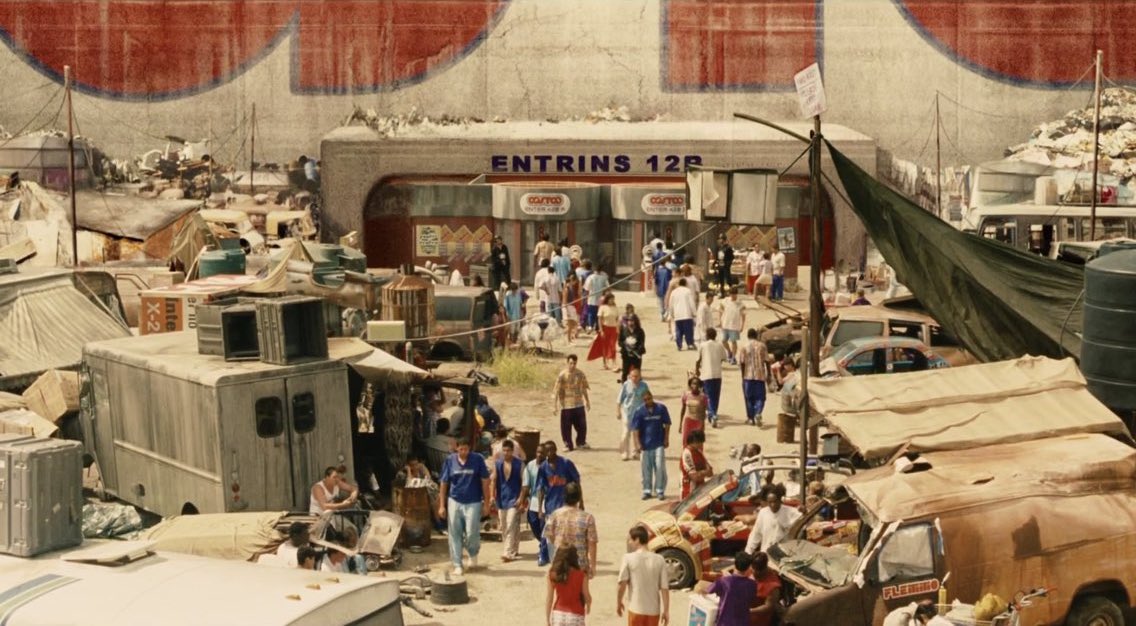 My mistake. The images above are from the 2006 movie “Idiocracy,” which posits a future in which humanity is beset by climate crisis, predatory monopolies, and extreme inequality. What a wild idea.

Here are the actual photos of the Amazon warehouse in Tijuana, courtesy Charmaine Chua. Sorry, but we live in a movie now: 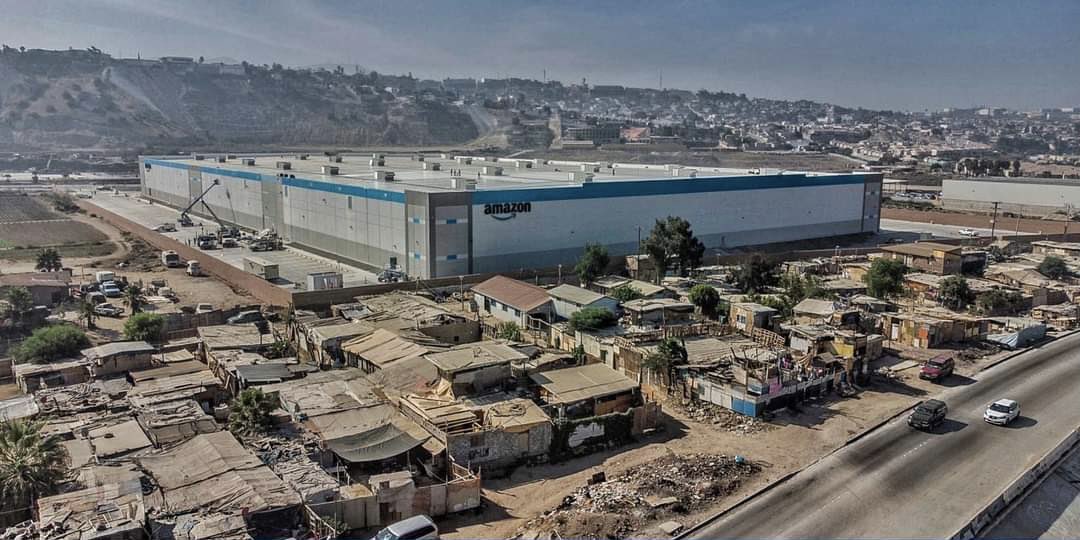