Something stinks in the tech industry, and we must address it

If there's a silver lining to the multiple catastrophes we're living through right now, it's the opportunity to look at life anew, stripped down to the essentials, and then to consider what we want to change.

It's a moment for clarity. Thank God, at least for this moment, we can set aside the vapid ideas. No more hype about "disruption." No more empty talk of "innovation." No more dazzling buzzwords, no more hiding behind our favorite logos. Let's look at how things really stand.

I'll say it plainly. Our tech-driven economy is largely dependent on exploitation. Facebook, Google, Amazon, and other tech companies derive profit from oppressing, harming, and in some cases enabling the killing of people who lack the money or power to defend themselves from the onslaught. This isn't an accidental byproduct of a well-meaning business: it is the heart of the business model. As I wrote in my column last week, the companies know exactly what they're doing. The executives and leaders not only know the game, they actively look for ways to expand and deepen the exploitation. (If you think I'm exaggerating, read the Wall Street Journal article from May 26.)

Here's an example from outside the U.S. that not enough Americans know about. In the Philippines, the authoritian leader Rodrigo Duterte has overseen a campaign of extrajudicial killing - claimed to be for a "drug war" - in parallel with the shutting down of the free press. (See this article from yesterday's New York Times for a snapshot.) Meantime Duterte has blanketed the country in propaganda supporting his regime, using the single media source most Philippine citizens can access: Facebook. Some people might wonder what Facebook is "doing about it," assuming that Facebook would want to oppose an anti-democratic leader like Duterte. But no. Facebook actively helped Duterte get elected in the first place, and since then Facebook has continued to expand its partnership with his regime. It's just good business for Facebook, enabling and profiting from the exploitation of Philippine citizens.

I could give other examples, like the authoritarian in Brazil who was elected with Facebook's help, or the genocide in Myanmar that was fueled by Facebook's engagement-for-profit algorithm. (Siva Vaidhyanathan wrote a blistering piece in Wired that put it better than I can. Read it.) And that's just Facebook: I could list global problems caused by other tech companies.

But that's not what I came here to talk about.

As I said, we need clarity right now. We can't merely point the finger at situations outside the U.S. (here I'm addressing my fellow American readers), as though someone should deal with that problem OVER THERE.

Because we have a problem here at home. And if you've read this far, you've arrived at the actual intent of this column: We have to acknowledge, and address, racism in America.

"I'm so tired of hearing about racism," someone might say. To which I would respond by pointing to the words of wisdom on the sign taped to the plywood wall. If you're tired of hearing about racism, imagine how tired people are of experiencing it. The nationwide protests in the wake of George Floyd's killing should be a giant wake-up call to anyone who hasn't been paying enough attention. Racism is here, it's in the tech industry, and we have to do something about it.

Now, I need to make clear that I do not see myself as any sort of authority. Except for one thing, which I'll get to, I can't claim any foundation on which to expound on American racism. I'm a straight, White, male, middle-aged tech consultant who - to put it simply - has heard about these problems but not lived them. So I am not going to perform some kind of outraged "wokeness" to show how enlightened I am. To the contrary, I know I need to spend more time reading, listening, and learning. That's my own homework.

However. One thing I do know is that Big Tech makes money from exploiting people, and a particular brand of exploitation here in the U.S. is the oppression of Black Americans for profit. I am comfortable stating this, no disclaimers needed. I have spent years reading dozens of books and thousands of articles, and on my radio show I've conducted over a hundred interviews - all to learn how the tech industry works. And I did learn. In many - not all, but many - tech-company board rooms, exploitation is the business model. Always adaptable to the local market. While Big Tech's exploitation in the Philippines yields Duterte, here in the U.S. we see that old, all-too-familiar American zombie shambling onto the scene. Racism.

God, what a tired, worn-out sin for us still to be dealing with. Racism has such a long history here, really an American tradition, from our very founding, present even before the Declaration. Hundreds of years later, even after all our brilliant achievements, all our moral victories, all the well-deserved trophies on our American mantle, the residue still coats the furniture. It stinks. (And while I'm here, I'll grant that it's not our only endemic problem. I feel like we haven't even touched the conversation around Native Americans. But one issue at a time.)

So here we are, in 2020, still talking about this. As we should. And any of my fellow White readers who feel skeptical or defensive about this column should go and read this statement about "structural racism" from June 2. "It remains a shocking failure that many African Americans, especially young African American men, are harassed and threatened in their own country," reads the statement. "It is a strength when protesters, protected by responsible law enforcement, march for a better future." Go and read the whole thing. It was written by President George W. Bush. I could point to statements along the same lines by President Obama, President Carter, General Jim Mattis, and others.

But then we get to statements from Big Tech companies, which in my opinion are a whole different ball game. Chris Gilliard has written a piece in Fast Company you should read: Tech companies caring about Black Lives Matter is too little, too late. Gilliard points out the outrageous contradiction between Big Tech companies' PR messaging and their business models, which exploit the very community they claim to be supporting.

Gilliard writes: "The publicity departments of all of these companies have tweeted out or posted that Black lives matter and that they 'stand with the Black community.' Thus to the venerable traditions of corporate pink-washing, greenwashing, and ethics-washing their deplorable practices, we can now add another: Black Power-washing, wherein companies issue essentially meaningless statements about their commitment to Black folks but do little to change their policies, hiring practices, or ultimately their business models, no matter how harmful to Black people these may be." 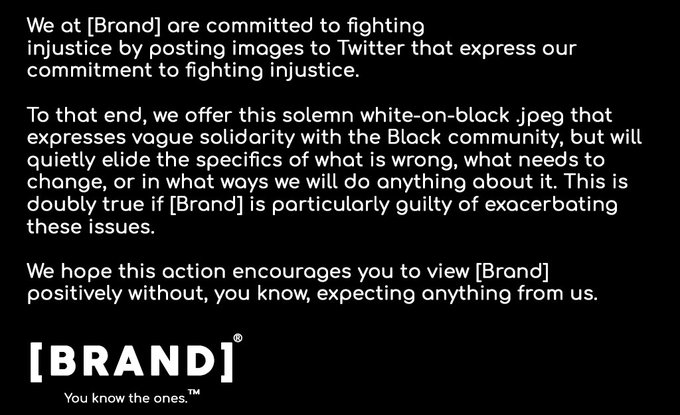 So we see Amazon posting, on Jeff Bezos's Instagram account, about "the pain and emotional trauma caused by the racism and violence . . . toward the Black community." You know what contributes to that trauma? Amazon's Ring video-doorbell platform, a nationwide surveillance network that amplifies and exploits the fear of Black people on neighborhood streets. Or look at Amazon's facial recognition product, Rekognition - and I'm not making this up, they named it "recognition" with a "k" - or the treatment of warehouse workers, which I wrote about here. The business model stinks.

Meanwhile, at Google's YouTube: "We stand in solidarity against racism and violence." Really, YouTube? Among other mind-bendingly evil practices, this company accepts - and encourages, through its Recommended Videos algorithm - videos promoting racism. (For skeptical readers: no, this is not an issue of free speech on a neutral platform. YouTube is a publisher, as its algorithm chooses which content to serve up. That algorithm actively points users to racist content, much like Facebook suggests that its users join hate groups. Read more.)

Racism in the tech industry is not a side issue, not some sort of unintentional or unexpected long-tail effect of an otherwise sophisticated mechanism. In the U.S., oppressing the Black community is part of Big Tech's business model. If anything, Big Tech's "performative wokeness," as Chris Gilliard calls it, is a clue to the deception. (Rule of thumb: whatever a Big Tech company claims publicly, often the truth is the exact opposite.) We have to come to terms with the exploitative nature of the tech industry.

As for what to do about it - especially if we discover that we're complicit in such a system - maybe I'll get to next time.

Thanks for reading, and listen to my interview with Chris Gilliard on Techtonic this Monday, June 8, at 6pm Eastern (3pm Pacific) livestreaming at wfmu.org.

P.S. If you're looking for a way to help, one worthy organization to give to is Custom Collaborative, run by my friend Ngozi (profiled here).