Why the Amazon VP should quit his job

"Bye, Amazon." Earlier this week, Amazon distinguished engineer Tim Bray posted an open letter explaining why he resigned from Amazon, giving up about a million dollars in the process. (Pre-tax, but still.) In a word, he felt that he couldn't continue at a company that fires whistleblowers - as a number of employees have been fired after speaking out about poor treatment of warehouse workers.

Even though Amazon is "putting massive efforts into warehouse safety," Bray writes, the company "has a corresponding lack of vision about the human costs of the relentless growth and accumulation of wealth and power." Bray concludes: "remaining an Amazon VP would have meant, in effect, signing off on actions I despised. So I resigned." A clear demonstration of integrity in action.

Or perhaps not. Bray's letter drew an outraged response from another Amazon VP, Brad Porter, who runs robotics at Amazon warehouses. Responding to Bray's complaint that Amazon is firing whistleblowers, Porter wrote in a LinkedIn post: "Amazon has responded more nimbly to this crisis than any other company in the world." Which had me wondering: did Porter read Bray's note? This isn't about comparing Amazon's agile process to, say, Walmart's. It's about the unfair treatment of workers.

No matter. Porter goes on to praise his team's use of "AI to review social distancing compliance," "temperature checks," "robotic palletizers and depalletizers"... you get the idea. Tech, tech, tech. For good measure Porter compares Amazon to an ant farm. I am not making this up. Direct quote: "Amazon is more like an ant farm that can adapt extremely quickly." Sounds like a 100% human work environment that definitely would never treat workers like inhuman robots, right?

To wrap things up with a final word of indignation, Porter writes that Bray's resignation note was... not just "offensive." And not just "deeply offensive." Instead, Bray's note was - deeply offensive to the core. Porter is really showing some spark here. Just one problem, though: once you take the language to eleven, it's hard to take it any further.

I'm interested to see what happens when Porter finds out that nine U.S. senators have asked Amazon for more details about its firing of whistleblowers. If it's "deeply offensive to the core" for a single VP to stick up for workers, what happens when a sizable percentage of the U.S. Senate says the same thing? ("Deeply super-duper offensive"?)

And that doesn't even begin to encapsulate the problems that Porter, by not resigning from Amazon, is complicit in enabling. Is Porter aware that over in the House, Rep. David Cicilline just sent a letter to Jeff Bezos announcing a criminal investigation for possible perjury, as well as apparent illegal activity in undercutting third-party products in favor of its private-label brands? Porter will also have to expand his super-duper-bonanza of being offended to include the Wall Street Journal, which reported on April 23 exactly how Amazon runs the scam.

What's more, back at the Senate, Missouri senator Josh Hawley has opened his own criminal antitrust investigation against Amazon. (Porter, losing his mind: "We run an honest ant farm here at Amazon, not some sort of criminal scam monopoly! Insanely-ultra-offended!")

In all seriousness, I want to grant that Brad Porter probably believes in the truth of what he's writing. He sees that he has good intentions, he's worked incredibly hard on improving warehouse operations (largely on the robots that will replace the workers, but still), and his success measurements of efficiency and scalability are tracking nicely. So for a fellow engineering VP to resign - that causes pain (hint: cognitive dissonance) and thus causes feelings of being hurt and offended (hint: defense mechanism).

I really mean no offense to Porter. If anything, I'm inclined to see his perspective, given our similar backgrounds: same alma mater, same major, same tenure in the tech industry, and a number of mutual acquantainces.

But the stakes right now are too high for me not to say something in defense of Tim Bray and the fired whistleblowers. Amazon is too powerful right now, and it's threatening workers, independent entrepreneurs, and the competitive marketplace - as well as the very idea of free democratic society (I'll get to the Ring surveillance network in some other column). When you have both houses of Congress starting criminal investigations - from both political parties - getting covered in both the New York Times and the Wall Street Journal - you really have to consider who the villain is.

Brad Porter may not see it today, but if he's really offended at unfairness, he should look at the company that he's enabling. To be on the right side of history, he should follow in Tim Bray's footsteps. Brad Porter should resign from Amazon.

P.S. Here's how to cancel your Amazon Prime membership. I cancelled mine months ago.

P.P.S. For more on whistleblowers in tech, listen to my interview with ex-Googlers Jack Poulson and Irene Knapp from Tech Inquiry, along with Liz O'Sullivan and Delphine Halgand, about tech-industry whistleblowers. (See the show notes or its listing on techtonic.fm: it's the Nov 18, 2019 episode.) This issue goes well beyond Amazon.

P.P.P.S. From a couple of years ago in the Seattle Times: Amazon has patented a system that would put workers in a cage, on top of a robot, yielding the image below: 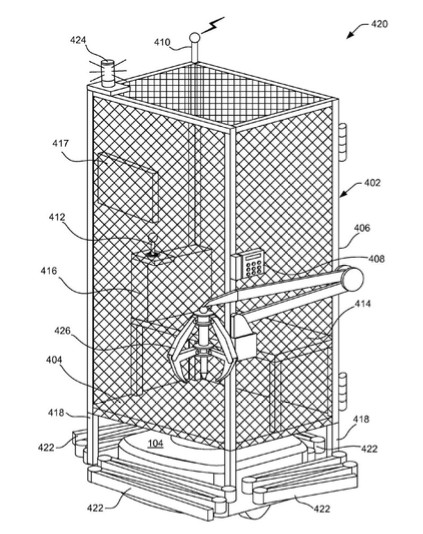