A “what now?” moment

Greetings from the island of Manhattan. Maybe it’s the haze, heat, and humidity, but I’m feeling reflective in this first week of August. Stepping back, taking stock, especially in light of a very important deadline that quietly passed a few days ago.

You might remember my recent column Our last chance in tech (June 28, 2022), about the climax of a years-long battle between American citizens and the tech monopolies. Democratically elected representatives in the U.S. Congress have been trying to force a change to the unethical, anti-competitive behavior of the Big Tech giants.

Specifically, the column described the antitrust bills in Congress, both with bipartisan support, curbing the corrupt practice of self-preferencing. Google and Apple, for example, would no longer be allowed to tune their app-store algorithms to downgrade potential competitors in search results. (Both bills are described in the column, with links to more info.)

Unsurprisingly, the companies targeted by the bills – Google, Apple, Amazon, and Facebook – mounted a ferocious counterattack: paying lobbyists millions of dollars to discredit the reforms, sending leaders to Capitol Hill (including Apple CEO Tim Cook) to meet with lawmakers, and even promoting a sham advocacy group – see the Politico investigation – that members of Congress called “fraudulent” and an “astroturf campaign.” Yet another example of Silicon Valley drawing on vast amounts of money – and deception – to make its case. 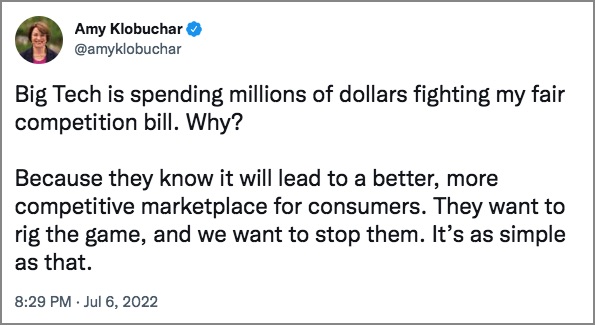 But there was a deadline. In order to pass, the bills really needed to come to a vote before the August recess. And that didn’t happen. Chuck Schumer, the senator who could bring the bills to a vote, did nothing – though he did make time for a trip to Seattle (American Prospect, July 11), where Amazon and Microsoft are based. It’s hard to discern what Schumer was thinking, though this New York Post article (July 24) makes an attempt.

Regardless, time finally ran out. The deadline for a vote has now passed. As Axios reported on August 1, Klobuchar said the tech antitrust vote will have to wait. Big Tech’s efforts to protect their monopolies have paid off handsomely. It’s unlikely that Congress will mount another meaningful attempt this fall, when lawmakers will be preoccupied with the upcoming midterm elections. And if, as predicted, there’s a shift in the majority party, there’s not much chance for tech reform in the next few years.

I discussed our quandary on Techtonic this week. (See playlist, stream or download the show.) The question facing us is: What now? The most powerful companies in history are now firmly in charge of the economy, the media, healthcare, entertainment, transportation, and increasingly – it appears – the political class as well. Now that Congress seems unable to curb Big Tech’s power, we’re left with the question of how to live in a society dominated by this cartel.

The only answer I can come up with is simple but not easy: Top-down didn’t work, so we’ll have to work bottom-up. Our response, both individual and collective, will have to change tacks. Of course, a miracle could occur and Congress could decide to throw off the influence of tech money to fight for democracy and fair markets – but I’m not holding my breath.

We need to change our approach:

• On the individual level, we can choose better tools. My Good Reports site recommends alternatives for search, email, web browser, etc. outside the toxic empires of Silicon Valley and Seattle. And we can minimize our social-media usage, or even delete our accounts. As I wrote last week in A most welcome decline (July 29), there is mounting evidence that social media is measurably harmful to health, especially for younger users. Now is a good time to break up with whatever tools are causing harm, and adopt some better alternatives.

• On the collective level, those of us in the tech industry should be working to build better platforms. Some of this is happening already. Look at the decentralized “fediverse” platforms in fediverse.info (as listed on Good Reports), and you can sense the momentum building for something – anything – other than the default mode of Silicon Valley. Venture-funded companies with a solitary goal of “growth at any cost” will naturally fall into lockstep with the surveillance, manipulation, and exploitation loops pioneered by Google, then adopted by the rest of Big Tech. There’s no reason that the products we use have to all stem from the cartel of sludge factories.

I ask again: Why does all our digital technology have to come from Silicon Valley? The tech industry should be working to create alternatives that intentionally and explicitly route around the Big Tech giants – in values, and in practice. As Jonathan Crary wrote in his recent book Scorched Earth (featured on the June 27, 2022 Techtonic), drawing on Ivan Illich:

In the early 1970s, the social critic Ivan Illich . . . wrote [that] tools are intrinsically social. . . . “An individual relates himself in action to his society either through the use of tools he actively masters or by which he is passively acted upon.” Illich insisted that people derive happiness and satisfaction through the use of tools that are “least controlled by others,” and warned that “the growth of tools beyond a certain point increases regimentation, dependence, exploitation and impotence.”

Now in August 2022, we find ourselves at the point Illich warned us about. Our tools and platforms are not controlled by us. They’re controlled by companies that have grown too large and have adopted dependence – that is, addiction – and exploitation as their dearest values. We need a change.

While I’m thinking of it, a couple of other regulatory items this week:

• Privacy: In the Markup, Julia Angwin writes that the Federal Privacy Law Has Momentum, but There’s a Catch (July 30). At issue is whether a federal privacy law should tamp down on individual states’ efforts at stricter policies (as in California, with the CCPA, and Illinois, with BIPA, its biometric privacy act). Worth keeping an eye on this: Big Tech oligarchs are always saying they support privacy regulation, which really means regulation that they influence. Any draft of a privacy law that is supported by Facebook, Google, and the rest is a guaranteed sludge factory.

• Email: As reported in Axios on August 4, the Federal Election Commission has tentatively approved Google’s proposal to keep campaign emails out of spam. Google’s proposal would give Google more power to decide which political emails to send to Gmail’s junk folder, and which to allow into the inbox. The power could expand later to cover emails from other government agencies. Over time, Google would cement its role as gatekeeper over the government’s communications with its citizens – a useful position to occupy, in case the democracy gets uppity again and tries to curb Google’s power. (Yet another reason to get off Gmail and use these alternatives listed on Good Reports.)

This barely scratches the surface of how Big Tech is working tirelessly, even in August, to amass and protect its power. There’s much else we can do, of course. But as a start, choosing and building better tools will give us a fighting chance, now that Congress has apparently failed.