A most welcome decline

A burst of good news this week. The AP reported that Facebook parent Meta posts first revenue decline in history (July 27, 2022). Axios pointed out that this was the company’s first drop in revenue since its IPO in 2012. And it comes on the heels of Facebook’s first-ever decrease in users, back in February. I’ve been waiting years for Facebook to begin its decline, even as it seemed nothing could slow it down. Last September, as I wrote in The fall of Facebook, not even the hair-raising revelations in the Facebook Files had a noticeable effect.

But something has changed, and it’s affecting all of social media. Snapchat is down. Google’s growth is slowing. And Twitter – where to start with Twitter? – is in trouble, as always, dealing with a decline in revenue along with Elon Musk’s ongoing clown act. These are all outward signs of an inner rot throughout social media, finally beginning to poke through to the surface.

The rot stems from the core of social media, which is the intent to make money by harming users and communities. Addiction, depression, self-harm, hate, division, and violence: these are all intended outcomes of the algorithm, which thrives on engagement at any cost. Manipulating billions of users as they create billions of posts, videos, comments, retweets, and likes, the algorithm operates at an inhuman scale while generating these inhuman – really anti-human – outcomes. There is simply no time or space given to create any sort of human context, community, or meaning. The most that companies will allow, when suffering from sufficiently bad PR, is the hiring of commercial content moderators to weed out a few bad posts – all while the algorithm continues to operate at scale, generating sludge and spreading it throughout society.

There is an upside, of sorts. The inhuman, unethical business model also generates an inhuman amount of money, which is gladly accepted by the leadership and VC investors of these companies, even as they claim to be concerned with the outcomes (intended all along) of their money machine.

Now that the rot is spreading outward, we begin to hear other voices tentatively joining the chorus of critics – like me and many others – who have been denouncing social media for years.

In Emergency Medicine News, Dr. Jacob Lentz published a blunt medical assessment (emphasis mine): It’s Time to Ask Patients to Quit Social Media (July 12, 2022). “Get off social media,” Dr. Lentz writes. “I can print out a stack of new studies to bolster my case every time I advise a patient experiencing depression or anxiety to delete his social media accounts.”

The data just keep coming to suggest that social media is destructive to mental health. Studies have connected it to a decrease in psychological well-being among adolescents, and others have tied it to the development of anxiety disorders and depression. Heavy use of social media has also been linked to loneliness and inattention, and the likelihood of having an eating disorder among adolescents has been correlated with the number of social media accounts someone has. Worst of all, suicides among young people skyrocketed by 56 percent from 2007 through 2017. . . .

Patients seem to get it immediately. . . . Convincing people that social media is making them feel worse than they would feel otherwise is not heavy lifting. It helps that it is no longer a secret that much of Silicon Valley’s wealth is built on priming our worst impulses. Last year’s Facebook whistleblower only confirmed what anyone with the tiniest amount of common sense already knew: These tech companies know full well what they are doing. It is a business model that runs on envy, pride, lust, and rage . . . turning us all into the product these companies sell to advertisers.

Over at the Financial Times, past Techtonic guest Tim Harford examined recent research and issued, as always, a thoughtful, data-based conclusion. Quoting his column, The high price we pay for social media (June 17, 2022):

[In a large study, researchers] asked people to quit Facebook for four weeks during the 2018 midterm US elections. A smaller but more recent study by researchers at the University of Bath had people eschewing all social media for a week. The results in both cases were striking, with clear improvements in a variety of measures of happiness, wellbeing, anxiety and depression. It seems that a break from social media is good for your soul.

Finally, Rebecca Seal asks this question in the Guardian: Is your smartphone ruining your memory? A special report on the rise of ‘digital amnesia’ (July 3, 2022). While there’s not yet a medical consensus on “digital amnesia” per se, Seal does feature several writers and researchers who are concerned with current observations – among them, past Techtonic guest Catherine Price. Seal writes:

Price thinks smartphone overuse could be harming our ability to be insightful. “An insight is being able to connect two disparate things in your mind. But in order to have an insight and be creative, you have to have a lot of raw material in your brain, like you couldn’t cook a recipe if you didn’t have any ingredients: you can’t have an insight if you don’t have the material in your brain, which really is long term memories.”

In the worst case, Seal writes, we could discover too late that smartphone overuse creates conditions, later in life, for the onset of dementia. Neuroscientist Oliver Hardt has done research on the brains of people who have stopped reading maps and instead rely on GPS directions: “When exploring the spatial capacities of people who have been using GPS for a very long time, they show impairments in spatial memory abilities that require the hippocampus. Map reading is hard . . . but hard things are good for you.”

All three pieces – from Dr. Lentz, Tim Harford, and Rebecca Seal – point to very good reasons to delete your social media accounts, if you can, or at least spend as little time as possible on those platforms. I’ve been following this advice, myself, as I logged out of my Twitter account several months ago and haven’t gone back (yet). So far, the results have matched the research quoted above: I’m able to read, think, and live my life more calmly than when Twitter was a daily presence.

My hope is that the current decline of social media is the result of millions of people coming to this same conclusion and – finally – removing social media from their lives.

But I might be wrong. The slowdowns at Facebook, Google, and Twitter are not necessarily due to the rot. Maybe it’s something else entirely: in spite of the growing mountain of evidence condemning the social-media giants, it could be that people are simply moving over to another platform that is taking the place of the older companies. This would be the Chinese-owned TikTok.

TikTok, by all accounts, has developed a much more addictive, and thus effective, algorithm than what Facebook and the rest have created. Videos on TikTok are short – a few seconds to a few minutes long – so in a viewing session of (say) an hour, the algorithm gets many more data points about a user’s preferences and thus can quickly detect and begin to exploit the user’s vulnerabilities. The speed of YouTube and Facebook looks glacial in comparison. Using all the unethical tricks of a Facebook but tuned to a higher pitch, TikTok and its Chinese Communist Party sponsors have the power to wreak havoc.

The tip of China’s propaganda spear is TikTok, which has a direct connection to the midbrain of a billion people, including nearly every U.S. teenager and half their parents. Facebook is the most powerful espionage vehicle ever created, and now China commands the most powerful propaganda tool. . . .

The network is massive, the ripple effects hidden in the noise. Putting a thumb the size of TikTok on the scale can move nations. What will have more influence on our next generation’s view of America, democracy, and capitalism? The bully pulpit of the president, the executive editor of the New York Times, or the TikTok algorithm?

Galloway also points out a curious detail: “Interestingly, of the billion global TikTok users, none of them are in (wait for it) … China. The country doesn’t permit TikTok to operate in its home market.”

It’s much like the Big Tech execs who don’t allow their kids to spend time on screens. This little data point should make us think: what do the leaders know about the platform, that would cause them to ban it from their home (country)?

TikTok’s rise, Scott Rosenberg writes in Axios, has spooked Facebook, ushering in the “sunset of the social network.” And while I don’t like the word “sunset” here – the decline of Big Tech is more like the receding of a deadly flood, or a plague of some sort – all the same it’s a most welcome decline. As Big Tech’s social media platforms begin to lose relevance, we have an opportunity to build alternatives to take their place: more generous, human-scale places for people to create, share, and connect. Imagine: we can build platforms that actually help people, and benefit future generations, and we can start now. That’s very good news. 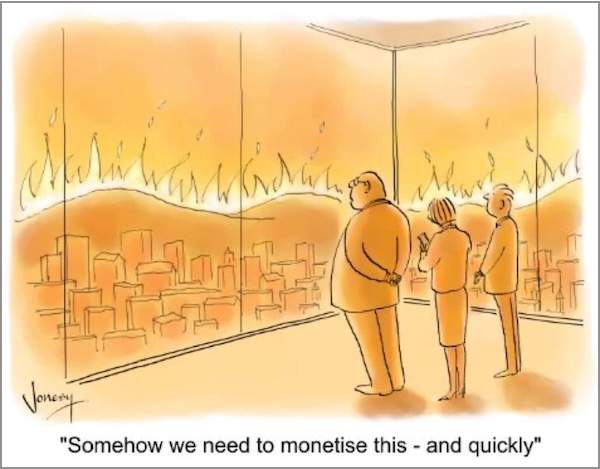