Walking away from tech

Wisdom from Paul Salopek’s worldwide journey.
By Mark Hurst • May 6, 2022

Awhile back I spotted a headline that went something like this: “Man Begins a Walk Around the World.” The story described how Paul Salopek, a National Geographic explorer, planned to walk from Africa, through Asia, across Siberia to Alaska, then down the west coast of the Americas. Except where a body of water required passage by ship, it would all be on foot.

The whole concept seemed unlikely. One man walking around the world? Was this some sort of promotional stunt that would fizzle out in a few months? Despite my initial skepticism, it turned out that the story was legitimate. Salopek laced up his shoes and began his journey in Ethiopia, soon crossing into Saudia Arabia and walking through the Middle East.

That was nine years ago. He’s still walking.

I spoke to Salopek on Techtonic recently. (Stream it, download it, see show links). He’s now in China and is hoping to proceed north into Siberia sometime soon. The Out of Eden Walk website contains posts from the regions he has passed through, showing the incredible diversity of people and places he’s visited along the way. Below is the route map of the walk:

Our Techtonic conversation focused on what Salopek has observed, and learned, from spending nine years walking. I brought up something he said a few years ago in Steve Elkins’ documentary Echoes of the Invisible, which I had covered in a previous show. Here’s what Salopek said:

We absorb information at the pace of walking, three miles an hour.

I keep thinking about pace. Both senses of the word are relevant: it’s both the tempo of our feet as we move through the world, and it’s the speed of our thoughts, as we try to take in what’s happening around us. And they’re inextricably linked: the faster our bodies move, Salopek tells us, the harder it is for our minds to absorb all of the information that comes at us. Humans evolved at walking speed, both legs and minds. We’re not built to live in a world that continually speeds up.

The technological society, of course, is built to a different set of specifications. We’re surrounded by machine-scale, high-bandwidth, scalable platforms with a focus on speed. Surveilling, analyzing, and delivering as much information as possible, as quickly as possible. We’re building a society that is literally out of pace with human needs.

It’s expensive to put this column together. If you read it regularly, please become a member – you’ll get all posts and discussions on the Creative Good Forum.

Beyond the strains on individuals, feeling overloaded and anxious, Salopek points out the threat to shared values such as cultural memory. Regions that have fully embraced the modern infrastructure of cars and smartphones, he says, are experiencing a general loss of awareness among the populace. People in cities hardly know how to give directions any more, or even estimate distance, unless it’s something they can look up on their phone. More intangible values, too, are changing: the art of listening, the feeling of trust, a sense of place. As the world speeds up, the memory of past ages is vanishing.

In his important new book In Praise of Good Bookstores, Jeff Deutsch shares an insight from Milan Kundera (emphasis mine):

In the novel Slowness, Milan Kundera explores what he refers to as the “secret bond” between “the demon of speed” and forgetting, and between slowness and memory.

As our world speeds up, we accelerate toward forgetfulness. It’s a trap that can be difficult to escape. As the meme below puts it: “me consuming 5 different forms of media at once / to prevent the chance of a thought occurring.” 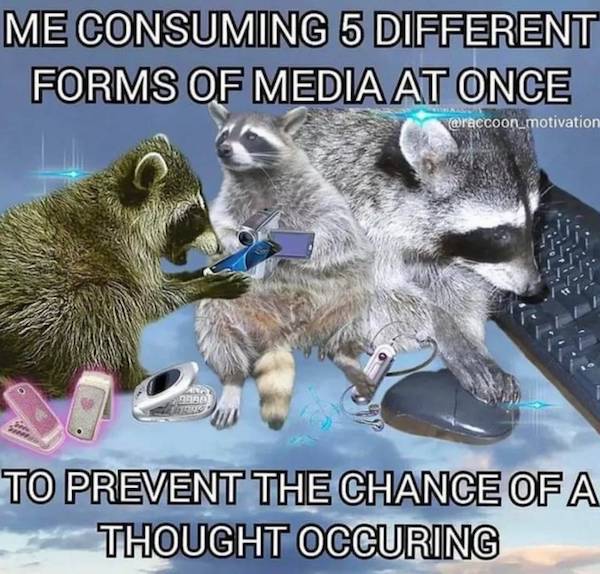 Paul Bradley Carr writes about the experience of slowing down after getting off Twitter recently. People wondered if he could survive, as a journalist and novelist in the tech industry, without having the second-by-second updates of rumor, deceit, garbage, and news that make up a typical Twitter feed. In his column Twitter: to the loon!, Carr describes what happened in the days after he deleted his Twitter account:

How was it? Well, it took me a full six hours to hear about the Will Smith Oscar slap vs six seconds for everyone else. I had to wait until 6am every morning to find out the latest covid rates or the death toll in Ukraine. For this terrible sacrifice of immediacy, I regained HOURS of my day. . . . Better yet, even in that one month-long break, I regained my ability to think.

(Carr and I spoke on Techtonic this week about his experience, and his thoughts about Elon Musk’s purchase of Twitter: stream it, download it, or see show links.)

It’s expensive to put this column together. If you read it regularly, please become a member – you’ll get all posts and discussions on the Creative Good Forum.

With the “demon of speed” running unchecked through our society, we have some stark choices ahead – both individually and collectively. To take Carr’s individual example: We have a choice between social media, and thinking. (Jonathan Haidt expands on this point in his recent Atlantic article.) Of course we should all hope for a thoughtful society free from Big Tech’s depradations, but it’s not going to be easy. Again, see the raccoons pictured above.

Collectively, we face some difficult, nearly intractable challenges. Teen mental health is one. Again from Jonathan Haidt, see Teen Mental Health Is Plummeting, and Social Media is a Major Contributing Cause (May 4, 2022), a summary of Haidt’s own research on the link between the disastrous products from the Big Tech giants and “adolescent mood disorders, self-harm, and suicide rates.” Haidt presented this report to the U.S. Senate, which I can only hope will finally do something to counteract the toxic sludge emanating from Silicon Valley.

In the meantime, it’s not just teen health. The acceleration of our technological society is bringing up a host of other problems – see Are Facebook and Google criminal enterprises? from last December. But for now, take confidence from our examples above. Paul Salopek, walking the world at three miles an hour, is teaching us why we should slow down. And Paul Bradley Carr shows that, even for those of us who have to use a screen, we can still take a first step. We can begin to walk away from tech.