How Google profits from criminal activity

The story focuses on Google’s Display Network, which is the part of Google’s ad business that places ads on sites and apps all over the world. An advertiser (the “buyer”) pays Google to place their ads on properties that will attract the buyer’s preferred demographic. For example, let’s say Nike has a million dollars to spend on promoting a new sneaker to male NBA fans between the ages of 18 and 34. Nike sends a million dollars to Google, who then says, “Trust us, we’ll get you the right people.” After taking some probably hefty percentage of the money for itself, Google pays out the remainder to “partners” around the world. These are the people and organizations that operate the websites and apps in the Display Network, making money by displaying ads from Google. What we have, then, is a transfer of cash from Nike to Google and whoever Google wants to send a cut to.

This is a problem. Google starts by saying “Trust us” because it doesn’t tell Nike who it’s sending the money to. Some of the partners are listed in a report after the campaign runs, but many of the partners – which can represent 15% or 20% of the ad impressions – are just . . . not listed. Despite Google’s own pronouncements about fostering transparency in the ad business, Google prefers to keep many of its partners anonymous.

Silverman’s ProPublica story shows just how many of these partners are known only to Google. Even after Silverman and Talbot spent months analyzing giant data sets in order to de-anonymize Google’s partners, there were still many left unidentified. Here’s an excerpt of a chart from the ProPublica story: 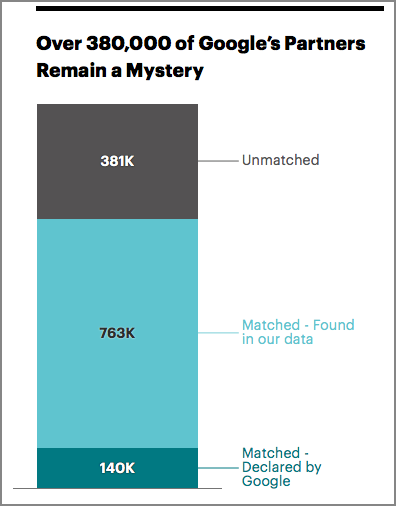 Out of its 1.2 million partners, Google has revealed the identity of just under 11% of them. Silverman and Talbot’s data analysis identified 763,000 more partners, an impressive feat – but even so, there are still over a third of a million partners that are unknown. Google is keeping their identities secret.

It should be obvious why this is a problem: Google is taking corporate money and sharing it with hundreds of thousands of partners around the world – who could be anyone. And since a given partner can operate multiple sites and apps, this could represent millions of online properties that Google is knowingly sending money to, but which the company refuses to identify.

And this leads to my favorite quote in the article. Ad-industry watchdog Check My Ads Institute put it this way: Google is “sending billions of ad dollars every day to unknown individuals around the world. It is effectively one of the largest dark money transfers in the world.”

Why would Google want to engage in dark-money transfers at all? After all, with (according to Google) 90% of internet users already reached by the Display Network, it would seem to be a secure enough business to be able to reveal who you’re working with. But that’s just the thing: in many cases, Google isn’t working partners that would reflect well on the company. From the ProPublica article:

Google’s reasons for not disclosing its publisher partners are “rubbish,” according to Ruben Schreurs, the chief product officer of Ebiquity, a media research company that has worked with such brands as L’Oréal, Sony, Nestlé, and Audi. He said it’s in Google’s business interest to keep ad buyers in the dark, because the Display Network is filled with sites and apps most advertisers would not want to do business with.

“They have so many obviously nefarious or even sanctioned partners that use Google’s technology,” Schreurs said.

. . . Schreurs said Google has a financial interest in concealing which sites and apps it works with. The company earns money by taking a cut of each ad placement — the higher the volume, the more Google makes. To maintain that volume, the company needs to work with low-quality and risky publishers, he said.

“We all know that most of Google’s inventory is crap,” he said.

In our Techtonic interview, Craig Silverman described some of the sketchier partners that Google maintains in its Display Network. (Again, these are the organizations that Google sends advertisers’ money to.) Here’s Craig:

We know they fund crime. We know there are absolutely criminal operations taking money out of the digital ad ecosystem. . . . It funnels money to crime syndicates. Digital advertising is funding crime because it is so out of control. . . .

But then there’s folks who Google has accepted into its program and said, yep, we’ll work with you, we’ll cut you checks. . . . Let me just highlight the Balkans . . . Croatia, Bosnia, Serbia . . . in some cases, fragile and emerging democracies. And what we found was that Google was the primary, and in some cases sole, source of income for some really destabilizing massive sources of disinformation in these regions. The worst example we found was a website in Bosnia which had ties to one of the most prominent genocide-denying, separatist politicians in Bosnia who, according to many people around the world and in that country, is trying to tear the country apart. . . .

Google was placing ads on this website in spite of the fact that he and this specific website had both been sanctioned by the U.S. Treasury. . . . That is the kind of thing that happens: when Google is not adhering to its policies in even enforcing, in some cases, laws, you fund genocide-denying politicians around the world.

And of course, it’s not actually Google funding them. Google sends Nike’s money (or whoever the advertiser is) to fund the criminal network, and Google profits from the deal. No wonder Google isn’t rushing to fix the situation.

As for advertisers: why would they do business with Google at all, knowing this is how it operates? Because Google is a monopoly. No matter how bad it gets, advertisers still perceive that they have to do business with Google. We can only hope that antitrust action will drop the hammer on Google soon. Until then, Google is knowingly sending billions of dollars every day to some of the worst organizations in the world. And Google profits every step of the way.

Listen to my interview with Craig Silverman. You can find more Techtonic episodes at techtonic.fm.

Mark Hurst, founder, Creative Good – see official announcement and join as a member
Email: mark@creativegood.com
Read my non-toxic tech reviews at Good Reports
Listen to my podcast/radio show: techtonic.fm
Subscribe to my email newsletter
Sign up for my to-do list with privacy built in, Good Todo
On Mastodon: @markhurst@mastodon.social