Among the many reactions swirling around Elon Musk’s purchase of Twitter, one in particular stands out: Where are we supposed to go now? Many people are guessing (correctly, in my opinion) that Twitter is destined for worse outcomes.

I say “worse” because Twitter is already richly deserving of its “hell site” nickname: a business built on algorithmic amplification of rage and hate, with users’ data and behavior subjected to opaque surveillance and manipulation, all while being shared in myriad directions beyond users’ awareness or consent.

Elon Musk, whose empire I summarized last year in Paying respect to our new technoking, is now the richest person in the world. He has no intent – and likely, no real power – to make Twitter any less toxic than it already is. The first necessary step to reform Twitter would be a permanent ban on algorithmic amplification, which would instantly shut down the profit engine. (Alternatively, Congress could abolish Section 230 protection, which would have the same effect.) Musk will advocate for none of this.

All of which leaves us with the key question: for those of us who want to connect with others online, Where are we supposed to go now?

For anyone reading these words via newsletter or website, I have a simple answer: Come join us on the Creative Good Forum. It’s time to get off Twitter and join us.

The Forum is run on open-source software called Discourse (not Discord, a totally different beast). The front page today looks something like this: 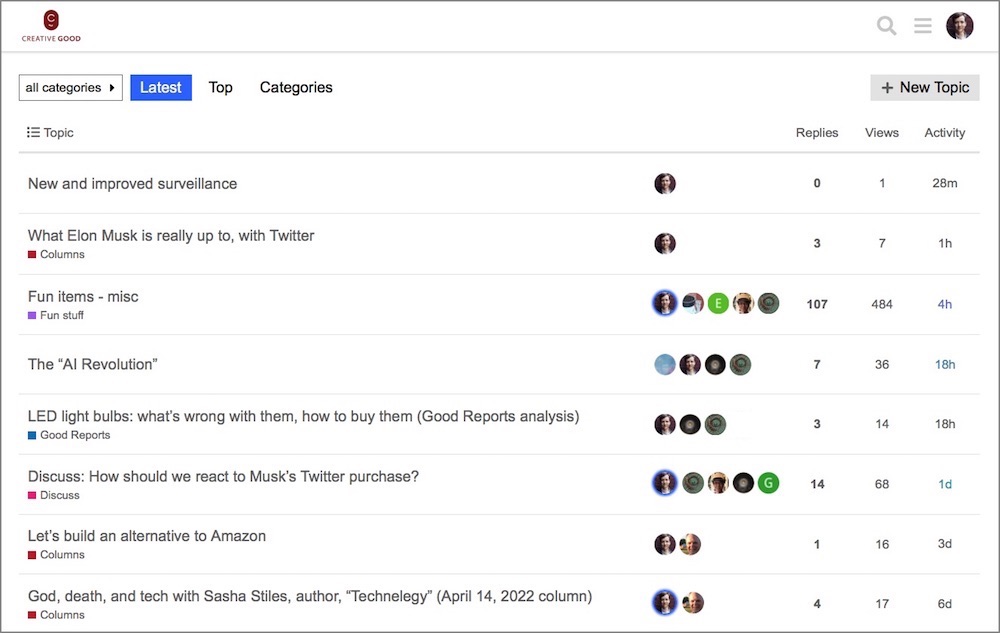 • The cost is straightforward. At Twitter, you paid with your attention (to Big Tech-brokered advertising) as well as your submission to opaque surveillance and manipulation. Addictive dark patterns kept you engaged while your words, your relationships, and your biometrics were all quietly tracked and analyzed. Creative Good does none of that. We just ask for a small subscription payment.

• It’s a small community, not a Tower of Babel. Rather than a network of millions of users (or billions, in the case of Facebook), we’re a small group – in the hundreds, so far – wrestling with how to live in the technological society.

• Posts are sorted transparently, not with an algorithm amplifying rage and hate. The main timeline, as shown in the screenshot above, is chronological. There are also optional “Top” and “Categories” views.

• We’re free to criticize Big Tech, as we’re not owned or funded by them. Creative Good is my own platform that I’ve run since 1997, and I own 100% of it, with no debt or investment that would make it beholden to corporate interests. This level of independence is unfortunately rare in online communities.

• There’s a lot of material only available to Creative Good members. Just this week I posted a new premium analysis on 🔒 buying LED bulbs (now posted on Good Reports), as well as a members-only column, 🔒 What Elon Musk is really up to, with Twitter. That’s in addition to dozens of other posts, including an ongoing 🔒 Fun items thread with entries over the past year.

It’s time to get off Twitter and start supporting an independent alternative.