A song about surveillance

A quick note today: I wanted to share with you a song that I helped put together with friends from WFMU, the amazing radio station that broadcasts Techtonic. A few weeks back, I was speaking with Scott Williams (himself a DJ on Thursday afternoons) about an idea we’ve batted around for a few years, of changing a well-known song into a tech-themed dystopian version. Almost immediately Scott said he knew just what song to work with: “It practically writes itself!” And thus was born “Sounds of Surveillance.”

Once Scott and I worked the lyrics into shape, he put the band together: Greg Harrison on drums, Matt Fiveash on bass, Lily Wen as audio engineer, and Scott himself on guitar and organ. Soon after the live recording session with the band, he and I went into the studio to sing the vocals, after which he added some more post-production magic to make the track shine.

If you like the song, you can pitch in to WFMU, which is about to start its annual October fundraiser. (New t-shirts are available for the fall, and WFMU has the best t-shirts.)

And now, the track.

Hello Siri, my old friend
You’ve come to spy on me again
Because the websites that I’ve been browsing
Give you insight into my thinking
Paranoia that you planted in my brain
Still remains
Within the sounds of surveillance

And in the metaverse I saw
Three billion people, maybe more
People texting without speaking
People swiping without reading
People monitored by devices that never cared
No one dared
Disturb the sounds of surveillance

And the people bowed and prayed
To the neon god they made
And the screen flashed out its warning
In the words that it was forming
And the screen said, “The billions in profits are written in the smartphone apps
Like Google Maps”
And whispered in the sounds of surveillance

Here’s the link again: Listen to “Sounds Of Surveillance” by Si-Mark And Scott-Funkel.

Finally, I should mention that Greg Harrison, the drummer on the track, designed this year’s Techtonic t‑shirt (which has limited availability - only in sizes S, XL, and XXL - with a $10/month or $75 one-time donation, and then clicking “1 DJ Premium”). Check out this design: 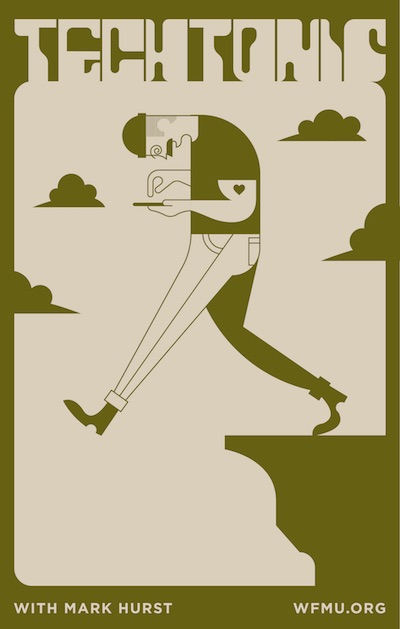 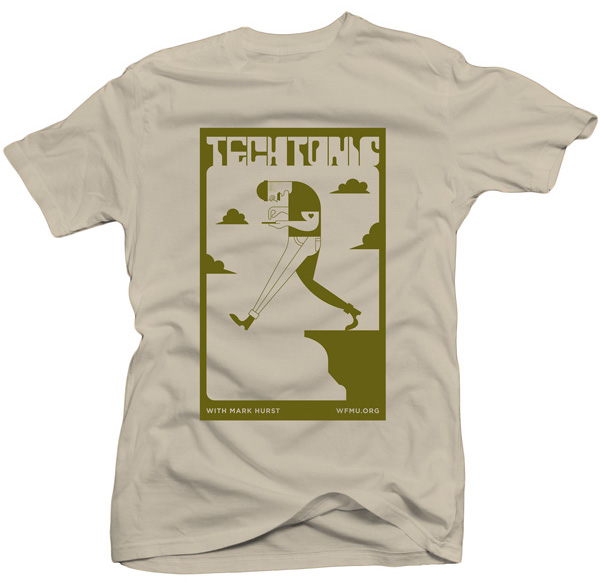