As cities embrace surveillance, we can resist

I spotted an incredible innovation this week. It was Tuesday morning, when I walked into the school gym and, after checking in, walked over to a small table with little plastic walls on three sides.

This was, of course, the voting booth.

Let me explain why this object is so important. Standing there, I filled out out my ballot, completely coloring in the ovals like I learned to do on the Scantron test forms in the 1980s. It took a few minutes to read the ballet, making sure I wasn’t accidentally voting for a lunatic, and color in the right candidates. Here’s the thing: no one watched what I was doing on the form. There was no camera in the booth, “for my security.” There was no QR code I had to scan “for my convenience.” There was no AI device offering up algorithmically-determined tips and updates. It was just me, a pen, a paper ballot, and three little plastic walls.

I’m not being facetious when I call this an “incredible innovation.” Because in just about every other area of life these days, I’m noticing digital tech popping up, uninvited, without any meaningful consent from me or anyone else affected by it. And all of this tech – whether cameras, or QR codes, or ambient algorithms, or hidden sensors – all of it is destructive to our privacy. In contrast, inside that booth, the complete and total absence of surveillance tech (other than the Apple spy device, aka iPhone, that I walked in with) was a nice reminder of what we could accomplish, if we respected privacy beyond the voting booth.

“Privacy is dead.” Remember that line, from about 10 years ago, as Silicon Valley ramped up its investment in surveillance platforms? Privacy is irrelevant, the techies told us, a relic of a former time when we were so benighted that we suffered through a life with – get this – boundaries. We couldn’t do “everything, everywhere, all at once” (to borrow a phrase). There were limits, whether imposed by relatively primitive tools, or socially, by a shared understanding of civil society. (Years ago it would have been unthinkable to allow the largest companies in the world – Wal-Mart, say, or Exxon – to listen in on family conversations in your kitchen.) The techies promised us a shining future without limits: efficient, frictionless, and – here’s the important one – transparent. The more we shared, the more “connected” we were, the better our lives would become.

These days, we live with the consequences of the past decade: the rise of Silicon Valley sludge factories and their “growth at any cost” monoculture and the surveillance society that they have built around us, when we weren’t paying attention. We were too distracted by their shiny gewgaws with their bright colors and their happy little beeps and blops and tweets and snaps and likes and hearts and poop emojis. So cutesy and so fun! And so infantilizing and condescending and also, if you stop to think about it, deadly dangerous.

There’s a story from San Francisco about how the city, now, is allowing the police to access any networked camera in the city, without a warrant, in fact without so much as a polite request. (Here’s the NYT story by Brian Chen on Nov 2.) A new ordinance declares that the police can look through any internet-connected camera in the city, at any time, for any reason. If you live in San Francisco and your neighbor has an Amazon Ring or Google Nest surveillance device facing the street as you walk by, you should just assume that they’re watching. (“They” being the SFPD, and Google or Amazon, and any third parties they share with or get hacked by.) And when I say “watching,” I mean that they’re watching the live, not recorded, footage.

San Francisco has now become a live panopticon, with public and private cameras alike captured by the Watchers: the blob of Big Tech, finance, and government partners that benefit from this new, shared data stream that – crucially – is out of the hands of citizens. All of this is happening with no meaningful consent from the surveilled, and no right to opt out. It’s outrageous.

Here in New York City we’re dealing with a newly launched rollout of 32-foot (10-meter) surveillance towers all over the city. From a strangely anodyne NYT story (Nov 5), here’s a photo by Amir Hamja showing what they look like:

These are the new “Link5G” towers that, the city claims, are there to provide 5G wireless internet access to underserved neighborhoods. Photos in the story included a newly installed tower on Manhattan’s Upper East Side (one of the richest neighborhoods in the country) and another in Brooklyn’s Bed-Stuy (also expensive, due to recent gentrification). Residents quoted in the story report being surprised as the three-story-high eyesores appeared suddenly, with no input from the community. Molly Osberg wrote this article on Link5G for Hell Gate – it’s much better than the NYT piece – about her visit to the Bronx, where she found residents confused by the rollout and unimpressed with the technology. (“Around halfway down the next block, it petered out,” Osberg wrote of the tower’s wifi range.) Could there be more going on with these towers?

To better understand Link5G, you have to know who’s behind the project: CityBridge, a consortium of several companies, one of which is worth a trillion dollars and rhymes with Scroogle. Just like the LinkNYC surveillance towers (a mere 9 feet, or 2 meters, high) blighting the streetscape, the Link5G towers are outfitted with surveillance cameras and other sensors, allowing Google – or excuse me, the “consortium” of which Google is the absurdly large and powerful member – unfettered access to the data stream. Just as in San Francisco, we see Big Tech, and big money, and big (city) government, collaborating on a citywide surveillance network, deployed against citizens, but outside the reach of those citizens to audit, or investigate, let alone opt out of.

Seriously, you should listen to this

I have good news, though. Really good news. My new Techtonic interview, from Nov 7, is with Carissa Véliz, Oxford professor and author of Privacy is Power: Why and How You Should Take Back Control of Your Data. The book spells out why privacy is important, why Big Tech is motivated to destroy privacy, and how we can – and must – fight back to defend privacy.

A key idea: Privacy is a requirement for democracy. Authoritarian regimes love working with Big Tech platforms (whether American tech or Chinese) in order to impose a surveillance state, control their citizens, and detect any stirrings of democracy in time to throw the activists in jail. The first steps that authoritarians take, in fact, look an awful lot like what’s happening in San Francisco and New York.

• Stream the show or download it as a podcast

• Jump to the interview with Carissa Véliz 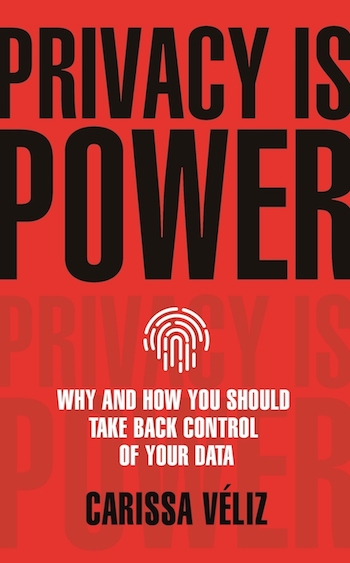 I hope you’ll listen to the interview, read the book, and take action. (You can start by joining my Creative Good community as we explore what’s happening, and how we can make tech better.)

I’ll close with two thoughts from Carissa Véliz in Privacy is Power:

The power to forecast and influence derived from personal data is the quintessential kind of power in the digital age. . . . Tech companies’ power is constituted, on the one hand, by having exclusive control of our data, and on the other, by the ability to anticipate our every move, which in turn gives them opportunities to influence our behavior, and sell that influence to others – including governments. . . .

To change our privacy landscape, we have to write about it, persuade others to protect their and our privacy, get organized, unveil the inner workings of the abusive system that is the surveillance society, support alternatives, envision new possibilities, and refuse to cooperate in our own surveillance.

That’s exactly what I’m trying to do here. I hope you’ll join me.