One more time: I hope you’ll listen to my interview on Soonish, where Wade Roush asks me how to “get off Google.” If you only have a couple of minutes, here’s a 90-second audio clip.

I want to observe today that Big Tech is turning our society into a kind of demented fun house. Lots of things that would be laughed away in a normal world are somehow being accepted, even praised, as they’re rolled out.

The recent mania for Bitcoin is a perfect example. A few months back, a user wrote this to express his devotion to Bitcoin:

#Bitcoin is a swarm of cyber hornets serving the goddess of wisdom, feeding on the fire of truth, exponentially growing ever smarter, faster, and stronger behind a wall of encrypted energy.

Cyber hornets... feeding on the fire of truth? Surely we can dismiss this as crackpot philosophy, with spiritual undertones, perhaps worth a laugh (“what are they on?”) before moving to the next story. Except for one thing: it was posted by billionaire Michael Saylor, CEO of MicroStrategy, a Nasdaq-listed company that is heavily invested in Bitcoin.

Now consider the photo below from the recent Bitcoin convention in Miami. The man in the suit is Max Keiser, financial entrepreneur and host of a show on Russia’s RT network. He’s performing a “bitcoin baptism”: 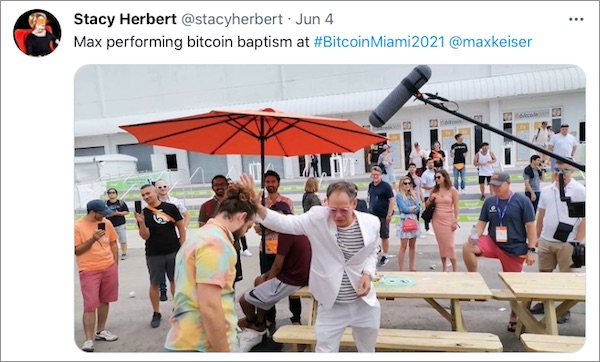 My thoughts on seeing the photo went something like this: Is this... a joke? It must be a joke. No one is actually getting baptized around a cryptocurrency. It’s a stunt for the camera, just for the giggles. And the flaws of Bitcoin are, by now, obvious to anyone paying attention. I wrote a Forum post about Bitcoin recently, and just this week Jackson Palmer, a co-founder of Dogecoin, wrote a searingly negative thread about cryptocurrency. All of which is to say, speaking of Bitcoin in religious terms has got to be a joke.

On the other hand, seeing the CEO of a publicly traded company posting about “the goddess of wisdom” and “the fire of truth,” maybe a better question would be, how much of a joke is it to talk about Bitcoin as a religion?

Just this week I came across a video called Bitcoin is the first religion that’s also a financial asset. Tech investor Geoff Lewis sits on an ocean overlook to deliver one of his self-described "cool takes on business, technology, and life." Here’s how he starts off:

One way in which you can think about Bitcoin is as the first religion that’s also a financial asset. And, uh, and, you know, sort of, got the, uh, Satoshi the, the mysterious founder, no one knows who it is, uh, it’s got the, uh, the white paper is kind of like the Bible, and it’s got, most importantly, the very passionate adherents, that are sort of very vocal, very passionate. And certainly, I want to be very clear to those adherents, that I’m very pro-Bitcoin, OK? So, um, very pro-Bitcoin, I want to make sure you correctly pick up what I’m putting down, I would love for Bitcoin to fulfill all of its potential and fill everything Satoshi envisioned for it. Nothing financially in the world would make me happier than that happening.

Lewis goes on to praise three apostles of this new religion: Michael Saylor (quoted above, author of the hymn to “cyber hornets”), Twitter CEO Jack Dorsey (keynote speaker at the Miami conference featuring the “baptism” shown above), and Elon Musk (the self-appointed “technoking,” as I wrote about in my May 13 column). 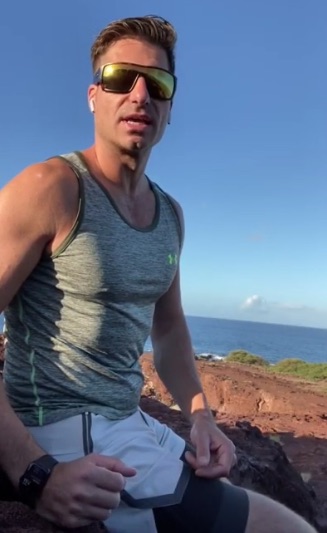 Geoff Lewis, in his video

I honestly wondered at first if the video was a parody. Lewis seems to present himself as a caricature of the surf-dude tech investor, greeting viewers with “’Sup” and a surfer’s hand gesture before heading outside by the beach to share his meandering thoughts about Bitcoin and religion. Much like Saylor’s post, and the “baptism” photo, this video raises the question: Is this... a joke?

Apparently not. Lewis showed up in the news this week, trumpeting his firm’s participation in a $150 million investment in Flock Safety, a tech startup claiming to be “the first public safety operating system.” Translated into English, what the company actually does is sell license-plate surveillance cameras – ALPRs, or automated license plate readers – which allow the local police, and Flock itself, to surveil the minute-by-minute location of all citizens on the roads, not just those suspected of a crime. The company is literally building the American surveillance state, backed by Silicon Valley investors, including at least one who holds religious belief in Bitcoin.

It’s not a joke. This is the point to remember. When we look past the fun house mirrors – the cyber hornets, the fake baptisms, the vapid religious talk on the beach – what Silicon Valley is actually doing is very, very real.

A word about Zuck. I spoke with Pete Davis, author of the excellent new book Dedicated, about Zuck’s foundation on Techtonic just a few weeks ago. (Listen here, or download the podcast.) Davis contrasted Zuck with President Jimmy Carter, who has spent much of his career, post-presidency, trying to eliminate one single relatively obscure disease. (Seriously, give it a listen.)

Ridiculously overblown mission statements seem to be a specialty in Silicon Valley, and Flock Safety’s mission fits right in, stretching the bounds of rational belief. Really, unregulated surveillance of our movements by a Silicon Valley startup and its network of police departments – will “eliminate crime”? Leaving aside the nitpick that the cameras will never be pointed at the criminal behavior carried out daily by Silicon Valley leaders (as I described in Yes, handcuffs will fit Big Tech CEOs), there’s the distinct challenge of believing that surveilling every car on the roads will drop all crime, nationwide, by a quarter.

But there it is in the press release. Flock Safety wants to “eliminate crime.” Once again, and I’m sorry to be repetitive today, but: Is this... a joke? 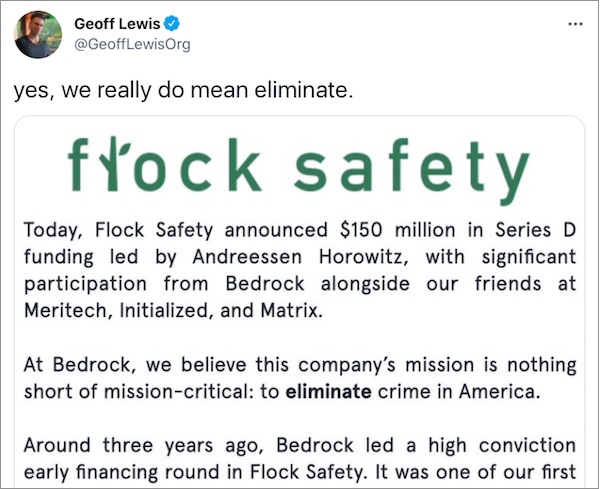 What’s interesting is that Silicon Valley’s true believers seem to think the rest of the world is a parody. A week ago I posted a Twitter thread, quoting dozens of people describing how tech startups are causing bigger problems than we all faced before they showed up. The thread starts off, “People finally realizing the ‘con’ in Silicon Valley startups” - and then goes on to criticize companies like Uber (for making things worse than they were with taxis, a well-documented problem), Airbnb, Google’s Nest, Musk’s Starlink, and many others.

The thread immediately went viral, gaining many thousands of shares and likes, and an overwhelmingly positive response in the replies. Many users suggested their own additions to the thread, bringing in yet more voices to the complaint.

And yet. In the midst of it all, I noticed a tiny minority of respondents sharing an incredulous response. Just a handful of people, almost all of whom – what a coincidence! – were tech investors. One deemed it “the worst and most cringy take ever on startups,” and just in case people missed his point, he added that it was “the highest concentration of bad takes ever.” Nice. Of course he gave no further explanation, details, or sources. But OK.

Probably the most interesting reply was this, from tech investor Ram Parameswaran:

Get it? Ram disagrees so much with the flood of complaints from non-tech-investors, complaints shared by many thousands of people, that he wonders: “Is this... a joke?” Much like my reaction to the cyber hornets, or the Bitcoin religion, or the promise of eliminating crime, he's thinking: this has to be a parody. No matter that journalists and researchers and activists and citizens and critics and communities are all pointing out the flaws of Silicon Valley companies: to Ram and his peers, it comes across... as a joke.

In other words: What we think about Silicon Valley every day, some tech investors think about us. And that's a problem.

The difference between Ram’s reaction and my own, I suppose, is that I didn’t actually laugh. Because Silicon Valley’s fun house – the Bitcoin con game, the fake religion, the surveillance state they’re building as I write this – it’s no joke. The tech investors are dead serious. And for the record, so am I.

Update July 18: I should have also linked to this when I first published the column. Welcome to the Church of Bitcoin (by Zoë Bernard in Rolling Stone, July 13, 2021): “Thousands gathered in Miami to talk about the OG cryptocurrency — but instead of your typical finance conference, it had the feeling of a fringe religious event.”