It’s an interesting moment in the tech industry, as its leading companies are behaving so badly that people are finally beginning to take action. Just this week, dozens of nonprofits signed on to HowToStopFacebook.org, a new campaign to “shut down Facebook’s surveillance machine.”

Notice the wording. Not “reform” Facebook, not “fix” it, but shut it down. Having said this for years, I welcome the new effort. (I signed the petition, too.)

Some people, like Andy Parker, are taking individual action. Parker just filed a new FTC complaint against Facebook. The on-camera death of his daughter Alison Parker, a TV news journalist, was shared for profit by Facebook and Google’s YouTube – for years. I wrote about Andy Parker in my July 25, 2019 column, after he complained to the U.S. Senate. Now over two years later, Parker says that he’s given up on congressional hearings and has decided that FTC action is the best chance for change: Watch his press conference (Oct 12) at the National Press Club, and see NYT coverage.

Bad behavior is spreading. Facebook and Google have made so much money sharing violent videos for profit that other companies are following along. Chris Gilliard points out this Mother Jones article (Oct 12) revealing that the Citizen smartphone app – which claims to share crime videos for public safety – actually sent a member of its own staff to the January 6 Capitol insurrection, to record video that could then be monetized. The article quotes an ex-staffer on the business model:

The ex-staffer said that Citizen’s model amounts, whether or not by design, to building what company analysts call “the fear machine” – a “perfect product feedback loop” that helps sustain revenue.

(More detail: See also the New Republic profile of Citizen (June 15), including the CEO’s instigation of a Los Angeles manhunt – I am not making this up – of someone who turned out to be innocent. The CEO publicly offered $30,000 for any Citizen user who could find the man – who, I’ll repeat, was innocent – and capture everything on video, for Citizen to monetize.)

Big Tech’s corruption is hardly limited to the U.S. Reporting from India, Reuters explains (Oct 13) how “Amazon copied products and rigged search results to promote its own brands,” a finding echoed by a domestic investigation by The Markup (Oct 14), and further analyzed by Ron Knox. Amazon, far from being a “customer-obsessed” company, habitually presents its own house brands above those of competitors, “even competitors with higher customer ratings.” The FTC is taking notice, as are European and Indian authorities.

It’s spreading locally, too. Google’s subsidiary here in New York City, in charge of the LinkNYC surveillance kiosks, has unveilled a new plan to boost revenues from its ethically-and-financially failing system. If the LinkNYC kiosks are wasteful eyesores, as I wrote in April, why not triple their size? No joke: Crain’s New York (Oct 13) provides this look at the proposed 30-foot-tall surveillance towers, feeding all data back to Google for opaque processing and potential sharing with third parties.

Here’s a photo from the Crain’s piece, showing the scale of these monsters. By comparison, people on the street look like ants. 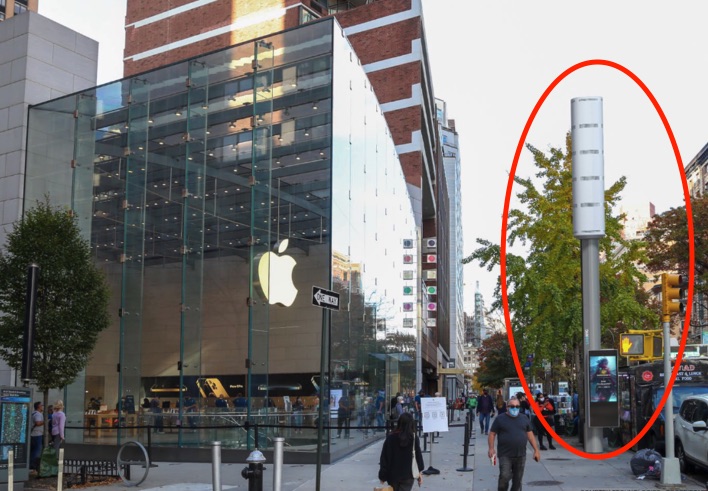 Finally, something new from those robot dogs – you know, from the one-time Google subsidiary that released those adorable videos showing robots dancing to pop music. Now, in a development that no one could have predicted (translation: among tech critics, what everyone predicted), the robot dogs are now being outfitted with guns. A Verge article (Oct 14, 2021) includes this cuddly photo: 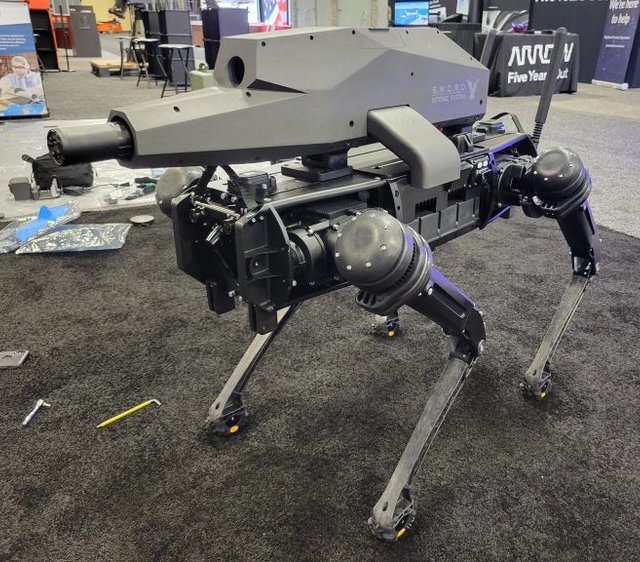 Don’t worry, robotic dogs wielding guns – almost exactly as depicted in the “Metalhead” episode of Black Mirror – would never come after you or your family. Right?

Everything I just described happened in the past three days. And that doesn’t include what I’ve posted recently – like my survey of voice surveillance (Sep 30) which I recommend reading, if you missed it.

What can be done?

The obvious, glaring question: What are we supposed to do about these unaccountable, uncontrollable companies? Given the scope of their corruption (worldwide), the financial resources available to them (essentially infinite), and the rate of their misbehavior (fast, and accelerating), it can be demoralizing to even engage the possibility of response.

That demoralized feeling is by design: as I wrote about in the voice surveillance piece, tech companies are intentionally and explicitly habituating us to their harmful products, bringing about a resigned, docile, and ultimately compliant citizenry.

We should resist that feeling of resignation by taking some action. It brings to mind the old quote: “The only thing necessary for the triumph of evil is for good people to do nothing.” Doing almost anything at all about the problem, rather than nothing, is a big step. And it may just be the first step towards larger, longer-term action. It’s not hopeless.

David Bodanis was my guest on Techtonic this week, talking about his new book The Art of Fairness: The Power of Decency in a World Turned Mean. The book argues that good people, following ethical and fair principles, can sometimes beat the “jerks” – the unethical operators who, for example, pursue a “growth at any cost” strategy. We cover baseball, the Empire State Building, Roosevelt vs. Goebbels, and a bit of island biogeography:

• Listen to the interview

My hope is that we can all find a reason to act: whether inspired by the stories in David Bodanis’s book, or the people above who are acting against Big Tech, or my own Creative Good community – which I hope you’ll join – there are plenty of positive examples to learn from. I hope to spotlight even more in future newsletters.

By the way, you can also cancel your accounts with these services. An easy way to start is to cancel your Amazon Prime account, where the customer experience continues to decline:

Whatever you do, resist the feeling of resignation. Good people need to act.