Skin care in a dystopia

A recent New York Times story included this image of the "BioButton," described as a "sensor attached to the skin 24/7 that uses algorithms to try to detect possible signs of Covid-19":

Are you ready to place the BioButton on your chest? I'm not, and I'll tell you why: skin care. For years we've heard about the importance of applying sunblock, staying in the shade, and so on. But Silicon Valley is about to usher in an era brimming with new types of dermal anxiety. In their bid for constant and neverending growth, and with smartphone sales leveling off, the tech giants need a new platform. And now they've found it. On your skin.

Look again at the BioButton, the friendly device with the harmless alliterative name. It's supposed to be "attached to the skin 24/7." Did you catch that? 24/7. Our little BioButton buddy is meant to be permanently attached. Imagine what the adhesive does to the skin after a few days.

But chafing skin and unsightly adhesive residue are problems that can be solved with future iterations. Silicon Valley is always ready to launch a version 2.0 - that's the nature of innovation, isn't it? - and sticky skin-computers will surely get the rapid-iterative treatment as well.

Here, I'll go ahead and give you the pitch. If you'll humor me for a moment, allow me to step onto this darkened stage, thoughtfully looking down while steepling my fingers onto my chin. Pause a moment. And then: "Imagine a world where BioButtons don't need adhesive. Where our skin once more is unmblemished by primitive glued-on devices. I'm proud to announce, available for the first time,... the BioImplant." Cue the Keynote slide showing frolicking young people of all skin colors, beautiful and carefree. "What you're seeing here are implant patients. They are the new generation, with clear skin, all living... un-buttoned." Nod sagely while waiting for the standing ovation to finish.

(I kid, of course. There will be no such stage pitch, because implants will not be persuaded into people's bodies. They'll be required.) Even so, the tech companies will surely emphasize the advantages of subdermal implants: no adhesive, no chafing against clothes, and above all, better skin care. Once the scar heals, no one will know that there's a grain-of-rice-sized surveillance device just below the surface of your arm, or neck, or chest. Superficial beauty will remain untouched.

Before you dismiss this as idle conspiracy talk, let me present another image. This is an ad served to Twitter users recently by Silicon Valley-based Citrix:

At first I thought this must have been a prank: Citrix? I thought. The business-software company? No way is it going full dystopia with implants, asking us to "imagine a future where implanted tech is a job qualification." This must be a jokey meme, trolling us into thinking the worst of tech companies.

Sadly, it's for real. The ad refers to a buzzword-laden PDF that is publicly available (you can read it yourself) laying out Citrix's fantasy future. After some opening sections making obligatory buzzword mentions ("blockchain," "gig economy," "tipping point"), we get to page 17. I'm going to quote this section verbatim, including the bold text from the original document. Citrix actually published a report, this year, that says this:

By 2035 some workers will have taken technology augmentation a step further, choosing to be enhanced with implanted chips. As well as enabling seamless, secure entry to buildings with the wave of a hand, these chips can capture and relay detailed data, constantly monitoring a worker's state and feeding into a system that can make optimization suggestions. Almost half (48%) of professionals would be willing to have a chip implanted in their body if it would significantly improve their performance and remuneration. But professionals are also concerned that the improved performance of enhanced workers will convey competitive advantage in the labor market, with human enhancement leading to a two-tier workforce (enhanced versus non-enhanced), according to 65% of professionals.

Wow. That was a lot, as the kids say. So let's review. The report claims, first, that almost half of employees today already are in favor of getting chipped, if it means getting paid more; and second, that employees in the future not only will aspire to be chipped, but will fear the career consequences of not being chipped.

Notice how these bold conclusions are presented as employees' own desires. It's as though company leadership would really have preferred not to install surveillance devices under their workers' skin, but hey, the employees kept asking for it! Citrix, bless 'em, is trying so hard to contort the message into a shape that sorta, kinda, might look vaguely acceptable in human society - and not at all like a horror-film dystopia of a tech-overlord company making a pitiless cash grab by locking down the very bodies of its workers. No no no. It's purely for the convenience of the employees - you know, for opening doors "with the wave of a hand"!

And it's not just Citrix. I wish this was just a one-off (or, given the BioButton news, a "two-off") - but this is much bigger. Implants are coming. At least that's the stated desire of the director of the Davos-based World Economic Forum, Klaus Schwab, whose 2018 book Shaping the Fourth Industrial Revolution includes these bright little pronouncements:

• "Some of us already feel that our smartphones have become an extension of ourselves. Today's external devices - from wearable computers to virtual reality headsets - will almost certainly become implantable in our bodies and brains."

• These will be "active implantable microchips that break the skin barrier of our bodies."

• "Implanted devices will likely also help to communicate thoughts normally expressed verbally through a 'built-in' smartphone, and potentially unexpressed thoughts or moods by reading brain waves and other signals . . . [imagine] the prospect of connecting our brains to VR through cortical modems, implants or nanobots."

And you thought the BioButton was scary. Are you ready to get a cortical implant - that is, a digital device sewn onto your cerebral cortex? Klaus Schwab is ready for you to have one. The foreword to his book was written by Microsoft CEO Satya Nadella, who has his own incentives for Microsoft software to burrow its way under your skin, and into your brain. (Purely for your convenience, you understand - waving at doors and that sort of thing.)

I did a search for cortical implants and found this helpful image, just to give a rough sense of what's being proposed. It features a man about the age of Klaus Schwab, which is funny because one person I'm quite sure would never sign on to get a cortical implant is Klaus Schwab.

If all of this sounds vaguely familiar, it might be because I wrote about neural implants a year ago: Mind-reading devices are coming from Facebook, Elon Musk, and others. Here's a diagram from that column, showing Elon Musk's Neuralink cortical implant: 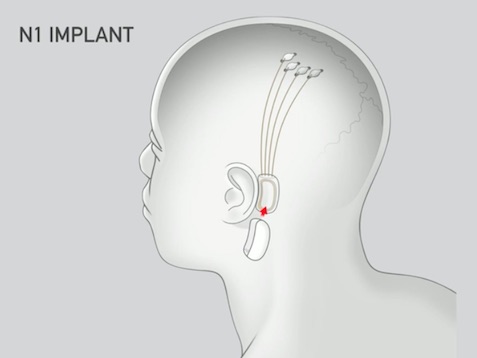 The lesson here is that "they told us so": Big Tech said last year that they were working on implants, and now in 2020 we see the BioButton, and the Citrix report, beginning to make the case directly to us, the intended subjects. We're going to hear more - so much more - about how small and innocuous they are (it's always "the size of a grain of rice" - I think because rice seems extra-harmless), and how convenient the benefits are (it's always "waving to open doors," for some reason). As the saying goes today: thanks, I hate it.

Implants are coming. I wish I had better news, but it's going to be difficult to dislodge the plans of Elon Musk, Satya Nadella, Mark Zuckerberg, Klaus Schwab, Citrix, and everyone else with dollar signs in their eyes. In the meantime, today would be an excellent day to throw away any unnecessary surveillance devices in your life - while you still have the choice.

Like the dermatologists say, you have to take care of your skin.

I'm still updating Good Reports, my new review site for online tools. (If you missed it, the launch announcement tells the back story.)

• Best mobile device got several updates: /e/ phones, Volla, Pine, and BoringPhones. This page is now is a full-fledged resource for anyone looking to avoid buying an Apple or Google phone.