This is the book. You need to read The Age of Surveillance Capitalism, by Shoshana Zuboff, professor emerita at Harvard Business School.

I interviewed Zuboff on a recent episode of Techtonic, my weekly tech show on WFMU. (You can listen to the whole show or just get it from the podcast.) Of the fifty-or-so tech books I've read for my show, this is the single book that pulls it all together, explaining why Google, Facebook, and other Big Tech companies consistently act in harmful and exploitative ways.

The book sounds a warning that is as simple as it is grim: we're entering a new age, with a new locus of power, which poses threats that are categorically different from what came before.

Insights from the book:

• The popular observation that "if you're not the customer, you're the product" is not quite accurate. Instead, you are the source of the product, which is your behavioral data.

• Surveillance capitalists need all of your behavioral data in order to feed their AI engines, which in turn create "behavioral futures markets." Whoever can predict your behavior can and will monetize it.

• All of your behavioral data means that you'll be surveilled in every moment, every activity of your life - not just those that, in previous ages, were left alone and treated as sacrosanct by commerce and government. Formerly private moments are now seen as sources of data to be harvested: A walk in the park. The intimate moments in your bedroom. Conversations with friends, your hopes and dreams, the very thoughts in your head: all must be captured by the surveillance capitalists.

• It's not just Big Tech companies doing this; they're just the pioneers. Now other sectors - insurance, healthcare, automotive, etc. - are trying to build their own surveillance-capitalist operations.

• The morals and values of this new age are being determined right now. This is not just an economic transition: what Google, Facebook, and Amazon now decide to do - or are constrained from doing, by regulation - will have wide-ranging, long-lasting consequences for human society. (Anyone who throws up their hands and says "I can't change anything" should consider that this affects the next generation, too.)

• Google, Facebook, and other surveillance capitalists, to date, have not shown any appetite or aptitude for moral leadership. Instead, in the words of a New York Times story on Facebook, they always "delay, deny, and deflect." Watch Google's EU public policy director evade a question in Parliament just last week by actually saying out loud that Google would take "responsibility yes, liability no": in other words, Google wants to be seen as responsible without having to act responsibly (which would require them to acknowledge that they're a media company, with liability for the toxic algorithm on which their business is based).

• We have a chance now to take action, but it won't last long. Every day, the surveillance capitalists tighten the screws a bit further. (Did you notice how Google just took control of all Nest data?)

• Big Tech leaders will do anything, and say anything, to keep you from knowing the truth of their operations. For example, in Google CEO Sundar Pichai's NYT op-ed on May 7, he claims that Google is the defender of privacy (!): "To make privacy real, we give you clear, meaningful choices around your data. All while staying true to two unequivocal policies: that Google will never sell any personal information to third parties; and that you get to decide how your information is used. . . . a small subset of data helps serve ads that are relevant and that provide the revenue that keeps Google products free and accessible." (Emphasis mine.) Pichar's claim is flagrantly untrue. That "small subset of data" Pichai refers to is largely irrelevant to Google's surveillance-and-control model. The real profitable data, as Zuboff's book makes clear, is the much more detailed dossier - Zuboff calls it the "shadow text" - that you have no access to, and will never get access to, as it is built from your harvested behavioral data and the resulting predictions Google makes (and, yes, sells to third parties) on that basis. 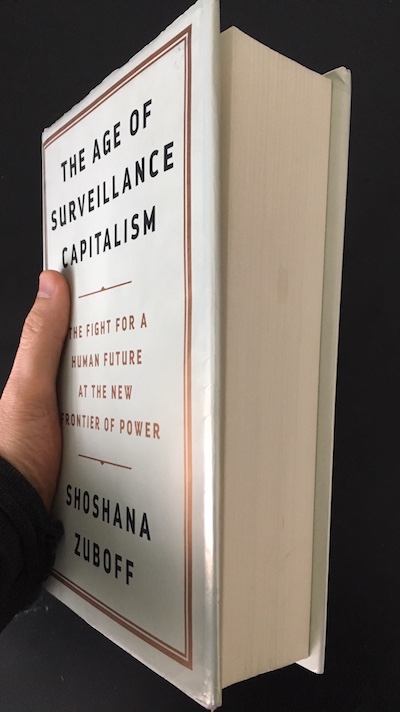 The Age of Surveillance Capitalism, by Shoshana Zuboff

Subscribe to my Techtonic podcast or visit techtonic.fm to get more insights and interviews like this. My interview with Shoshana Zuboff is the May 13 episode.