I was intrigued by the recent obituary of master woodcarver David Esterly (NYT, June 21). Inspired by 17th-century woodwork by Grinling Gibbons, Esterly pursued this long-gone style of woodcarving for his entire career, making dozens of pieces for private collectors and writing multiple books on the topic.

Here's a detail of one of Esterly's carvings (from his Wikipedia entry). This is all limewood: 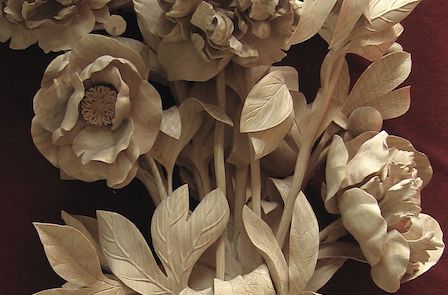 What really stuck out to me was Esterly's comment about his chosen field:


"It's not a matter of keeping alive a tradition, or even reviving it . . . The tradition is dead as a doornail. Nevertheless, I have marinated myself in Gibbons. He has the strength of line and assuredness that, to another carver, are awe-inspiring."

In other words, the world had moved on from this style of woodcarving, but Esterly stayed with it. What's the dividing line, I wonder, between a dying idea that can be revived, and something "dead as a doornail" that is irretrievably gone (albeit perhaps worth spending one's life on anyway)?

Or to put it another way, what's the difference between resisting - in the hopes of changing a situation - and accepting the battle as lost, even if you choose to keep on fighting?

I've been thinking about this recently as I consider the spread of Silicon Valley culture into society - permeating companies and teams, in all sectors, and affecting everything, down to individual lives, at nearly every conceivable moment. At work and in daily life, people are being thrust into the service of Big Tech business models whether they like it or not.

More and more companies - and product teams - are encountering new expectations, driven by Big Tech, for how to treat users. For example, I remember giving a talk on my book Customers Included to a user experience team at a well-known hospitality company. At lunch afterward, the UX designers complained to me that leadership was forcing them to deceive users: "We're lying to our customers." I could understand their frustration: the company's emerging business model forced them to deceive and exploit the very people they had trained, as UX designers, to help!

It's cold comfort to note that those designers are not alone. A major study of dark patterns, just released by Princeton professor Arvind Narayanan, shows the widespread deceptive practice online of using corrupted UX principles to trick people into shopping and buying. (See Narayan's thread with more info.)

Deceiving users, as a business model, is so obviously reprehensible that Big Tech companies rush to deny that they engage in it. (They're shocked, shocked! that anyone would suggest they would ever exploit their users.) For example, a recent U.S. Senate hearing on "persuasive technology" featured an exchange between Hawaii's Senator Brian Schatz and a UX manager from Google. Listen to this amazing exchange: Google's representative categorically denies that Google uses any manipulative design patterns, in any product, including YouTube. (Find it at timestamp 1:11 in the Senate's video archive.) To call Google's statement untrue would be generous, as it barely scratches the surface of how Google products exploit users. Read my column We need to have a difficult conversation about Google for more. The fact remains that the predators at the very top of this exploitative ecosystem refuse to even acknowledge what they're doing, let alone change it.

Back to our woodcarving question. The idea of treating users with honesty and respect, creating genuinely good experiences for them, has gone out of favor. But is it irretrievably gone, like Esterly's woodcarving, or is it still worth trying to revive this bygone idea through acts of resistance?

Here's one hopeful sign that resisting Big Tech's toxic defaults, and improving the user experience, still works. DuckDuckGo founder Gabriel Weinberg, writing an op-ed in the New York Times recently, points out that "the big ad-tech companies - especially Facebook and Google - know how to sell ads without damaging privacy, but they choose not to." In other words, it is still possible to run a profitable tech company without adhering to the exploitative practices favored by Big Tech giants. Resistance, by product teams, can revive the practice of treating users with respect.

Speaking as an individual, I don't like the default settings being handed to us today. I don't just mean the Settings menu in a software app, like how the toolbar is organized. No, I mean the default settings for life in a society increasingly defined and manipulated by Silicon Valley. These are becoming the default expectations for being a functional member of society. They're like software settings, except they're for people like you and me, telling us how we should live.

Or this: stick these digital things - these pods, these buds, these flippitybits - into your ear canals, and never take them out, so that your device can always get your attention. Just walk through your day with your head in the cloud(s) - often with head bowed, showing proper respect for the glowing screen in your hand, as it guides your every step: mentally, emotionally, and physically.

Above all, the default settings tell us, just accept all of this as inevitable. Call it "progress," call it a "necessary evil," or just ignore it. Whatever you do, don't look up . . . because you might notice the cameras tracking you from Google's LinkNYC surveillance kiosks (yes, they're from Google). Citizens of New York, Philadelphia, Newark, London, and Toronto are all subject to "smart city" [sic] projects from Google/Alphabet - and your city might be next - so there's an increasingly strong suggestion to see it all as just "the way things are now." Inevitable.

These defaults came from a few product teams in Silicon Valley and Seattle, driven by business models that serve a very, very few senior leaders and major investors. They're not designed for your benefit.

Increasingly I find myself saying no. And I'm not alone.

All three of my most recent Techtonic radio guests have brought up their strategies for resisting Big Tech:

• Jenny Odell talks about "resisting the attention economy" in her book How to Do Nothing. (See show notes, listen to entire show, or jump to interview.)

• Damon Krukowski talks about finding meaning - in books, music, and other people - in places outside the grip of Big Tech, in his book and podcast "Ways of Hearing." (See show notes, listen to entire show, or jump to interview.)

• Scott Urban has created "privacy eyewear" that he calls Reflectacles. Wearing anti-surveillance glasses is one way to actively resist the defaults. (See show notes, listen to entire show, or jump to interview.)

And here are recent short radio segments, two minutes (or so) each...

• WFMU is superior to Spotify, and Damon Krukowski explains why.

• How to do nothing: put down the phone and take a deep breath.

• Revisiting a prediction for 2019: let's hear it for the Department of Justice!

• Where "flat earthers" come from: Google/YouTube's toxic algorithm and a lack of science education.

Whatever you do, don't give up hope. Resistance is still possible, and it starts with paying attention to what's going on.

Subscribe to my Techtonic podcast to keep in touch.

To share this column, retweet this, or copy and paste this: