I enjoyed speaking Clive Thompson about his new book CODERS: The Making of a New Tribe and the Remaking of the World on my FM radio show, Techtonic, a few days ago:

• You can listen to the entire show, or jump to the interview.
• Read show notes.
• Get it on the Techtonic podcast.

Software programmers seem to be running half the world now, so it's worth getting to know their mindset, their goals, and - their history! You might know that the earliest "computers" were women at Maryland's Aberdeen Proving Grounds, calculating (computing) missile trajectories. What I didn't know was that following this early history, many-to-most of the earliest software programmers were also women. More recently, coal miners in Kentucky are taking up software, as "the new blue collar" programmer comes online.

Listen to the interview - it's a fun one. 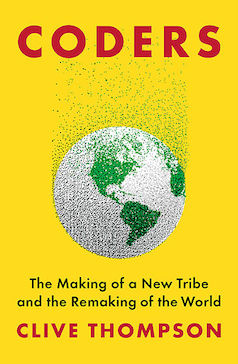